I’m not a runner. It hurts my back, my ankles and my knees. Plus, I get bored. Give me a mountain bike and I’ll head 30 mph downhill on singletrack, thank you very much.

Despite that I competed in Utah’s Spartan Super this year, and it’s all because of my coworker Jason. Jason became unexpectedly hooked on Spartan Races by spectating at a race his wife and son competed in. Inspired by the camaraderie of wild-eyed racers charging across open flames, he was all in—registering for races across the country, entering one each month of the year.

Soon Jason was absent from post-work happy hours, opting instead for miles on the treadmill and deadlifts while the rest of us hoisted 12 ounces of beer at a time. As the Spartan season began to increase mileage, adding obstacles and difficulty, Jason got thinner, stronger, and more motivated. The rest of our small staff could not help but be inspired.

What began with the idea of our staff attending the Eden, Utah race last August as a show of support resulted in 10 of us signing up to participate. Running eight miles, hauling ourselves over, through, and under 30 muddy obstacles, is one hell of a team-building exercise. 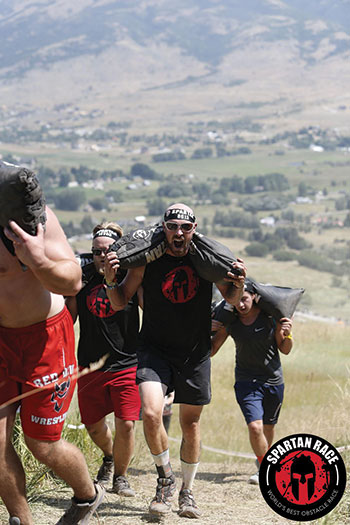 How do you really train for some of the Spartan obstacles? I don’t have sandbags just laying around I can carry up a hill, buckets of rock to fill, monkey bars, or eight-foot walls to scale without drawing the attention of the neighbors—or sheriff.

Most of our team went for trail runs and threw in push ups where possible. It would have to suffice, along with watching a few videos on the Spartan website that explained the obstacles and offered “tricks” to complete them. These videos mainly served as good comedy to email around, as the narrator is usually extra amped. We’d share photos of our workouts and “Spartan faces”—essentially yelling at the top of a training run and sharing a red-faced pic.

Oh, did I mention if you cannot complete an obstacle on race day—or simply don’t want to—like, for instance, crawling under barbed wire, the penalty is 30 burpees? True story. Our strategy revolved around how to avoid to course marshals, in case they were militant about penalizing our failed attempts (they didn’t) instead of how to actually do a burpee or the obstacle itself. Hey, we paid for this! We can do what we want! 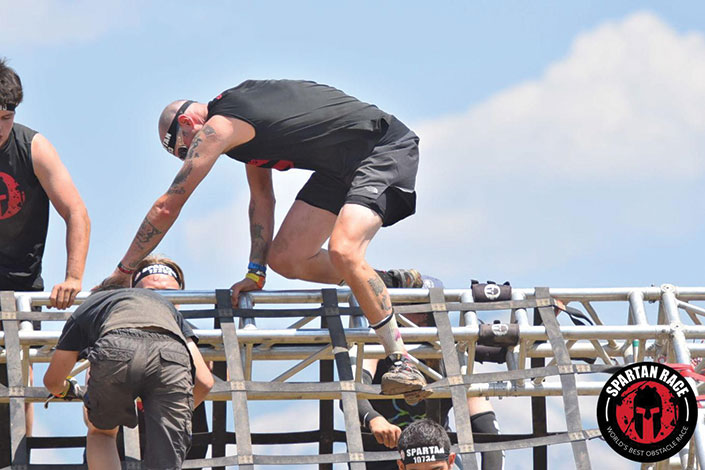 Come race day we donned our numbered headbands and timing chips, then climbed over a six-foot wall to get into the start area. One obstacle down! A loudspeaker blared the voice of a motivational speaker—probably the same guy from the training videos—to amp up participants with rally cries and fables of Spartans, to which the crowd would respond by yelling “Aroo!!!”. Not knowing these group chants a look of “What did we get ourselves into?” was painted on our confused faces.

Mercifully the gates opened, and the race opened with a mile or so jog across the lower flanks of the ski resort, with a few small walls to scamper over. So far, so good.

The trail then began to head uphill. As in directly uphill. I realized pretty quickly we were ascending a downhill mountain bike trail, which typically take advantage of a direct vertical drop. This one had nary a turn to it.

Starting as a group of 10, we quickly split into groups of two or three based on our running speed. Or, more accurately, our scrambling and hiking, then crawling and panting, to slowly walking speed. I wound up teaming up with a strong hiker, Greg. What I lacked in speed, I was able to contribute a lending hand on climbing up some of the taller obstacles. The cargo net, and the Z-wall—basically a mini bouldering wall to traverse, played more to my “skill” set. We quickly came up with methods to help each other lift objects that needed to be carried, climb walls, ropes, and bars, continually pushing each other and contributing our different strengths.

Mile 2 and 3 quickly became mile 5 and 6. As the course began to wind downhill, the obstacles became less challenging. Soon we could hear the finish area. With about a mile to go, Jason’s son, Ian, happened to be in line at feature that had a bit of a wait where participations throw a javelin over a fence and into a hay bale. Having a few Spartans under his belt, Ian had a sketch in his mind about what obstacles were left in our way. It was just the encouragement we needed.

“All that’s left are the triple mud pits,” he yelled. He sounded excited, but I was not. Dunking my head into tepid filth sounded like an instant ear infection. Ian must have read my mind and pointed to a low spot where I could limbo my head under the barrier, but above the water. Thoroughly soaked, we squished and dripped our way to the finish line guarded by a small fire, and leapt over for the requisite photo-op. 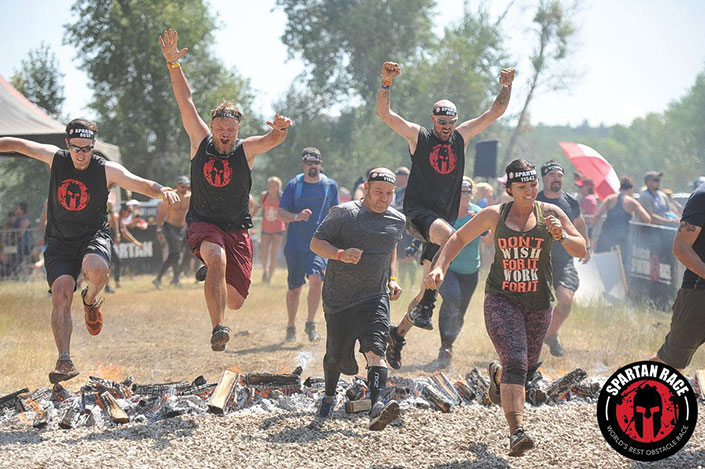 We gulped down our free finisher beer, then hit the line of hoses to clean up and changed into clean clothes to head to the Shooting Star Saloon for burgers. The first few tables were full of other Spartan racers who had the same idea, who greeted us with a loud “Aroo!” as the door shut behind us. We half-heartedly waved back. I guess we weren’t joining the tribe after all.

Would I do a Spartan again? I never thought I would do one in the first place, but there I was, with photos to prove it. So, maybe. The shared training experience absolutely brought our team closer together and swapping war stories from the course was the top office discussion for at least a week. That’s worth at least considering it…in a few months. I just won’t be yelling “Aroo!” anytime soon. 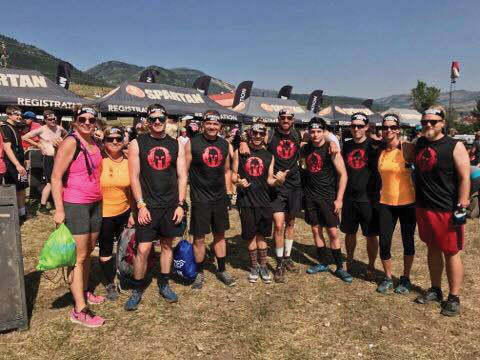 How You Can Become a Spartan

This year’s Utah Super will be held on Saturday, July 28 at Nordic Valley Ski Area in Eden, Utah. Expect a course of 8–10 miles with 24–29 obstacles. Aim for a morning start to avoid the heat of the day and dustier trails.

You can enter solo, or better yet, build a team as we did. Team Sparty McSpartanFace is already taken, in case you were wondering.