Getting tossed around a boat by glacially cold, raging waters is awfully entertaining. I could actually feel my character building as we made our way through Big Swirly Rapid on the Upper Clackamas River. I tried my best to keep paddling as the river served up consecutive ice bucket challenges to my face, but to our professional guide, Chris Lessick of Blue Sky Rafting, it probably looked like I was just trying to swat the splashes away.

The Clackamas River is one of the best whitewater rivers to paddle in Oregon, and it’s conveniently close to downtown Portland. Thrillseekers in need of a quick adrenaline fix could skip the morning rush and finish a half-day run by lunchtime because it only takes an hour to drive to the put-in point near Promontory Park.

The water source originates from Olallie Lake and flows northwesterly through the Cascade Mountains on its way to the Willamette River. Rapids range from Class II to Class IV, depending on the time of year. Spring is a great season to go because the water level is higher, which makes the rapids more fierce thus increasing the level of fun-having, but you can raft year-round on the Clackamas.

The Clackamas River winds through the canyon flanked by ancient cedar giants and Douglas-firs that tower over rafters as they pass by. These trees are some of the largest and oldest in northwest Oregon. This protected expanse of wilderness is part of the Federal Wild and Scenic River System, and it is a sight to behold.

In some areas I could see 20 feet deep or more into the blue-green water because the clarity was so good. Our chief steerer was kind enough to lead us to a little waterfall along the bank so we could have a fresh sip of clean river nectar.

Of course, the calm areas between the rapids make prime spots for rafting games. Our captain forced (see: dared) me to play what paddle pros like to call “Wheel of Fortune,” during which one stands in balance on the bow of the boat while holding a short piece of rope tied to the vessel while the other occupants backpaddle to spin the boat round and round.

Despite my superior balancing abilities, the odds were not ever in my favor, and I could only teeter for so long before falling into the river. The water temperature was 55 degrees, though I didn’t mind so much because I hadn’t had any coffee yet that day and I needed a good waker-upper. Also, I had the perfect combination of clothing on to combat the frigidity. If you ever have the chance to play “Wheel of Fortune” on a rafting trip, I recommend you take it—I also recommend you wear a long-sleeve rash guard, bib-style wetsuit, long-sleeve fleece, drysuit top, and booties. Our skipper recommended this set up; obviously he knew what was coming.

Our Master and Commander knows some things about rafting and to prove it, he eased our ride into just the right position on the Rock ‘n’ Roll Rapid, which allowed us to surf it steadily for entire minutes. It was quite a feat.

While surfing on a rapid was an experience I won’t soon forget, it wasn’t even the most remarkable thing about the run. I hate to let the secret out, but aside from a few anglers out to catch some summer steelheads, we were the only people on the river.

We didn’t see any other guiding companies floating along during the entire excursion. It was just the bald eagles and us out there. Us watching them and them watching us. Sure, it was a Wednesday morning, but it’s hard to believe that such a beautiful place would be so quiet (aside from our screams of terror—joy, I mean joy) as we crashed into the roaring waves. This might be where they record those nature sounds CDs that people listen to while they sleep.

Six miles of rapid after rapid, giggles, and wannabe-viking hollers passed by too soon and as we reached the end of our tour, we found ourselves wishing we could do another lap. Maybe next time we will sign up for the full-day trip.

Or it wouldn’t be unreasonable to take the hour-and-a-half flight from Salt Lake City to Portland for the day, then hit the river for a half or full day before returning home. People from Oregon do that when they want to come to Utah to ski for the day, right? Of course, then we might miss out on all of the other spectacular things to see, do, eat, and drink in Portland. 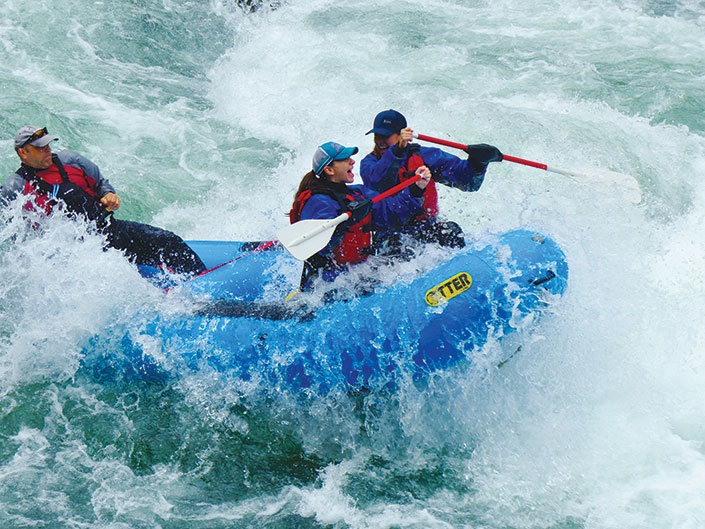