Trending
Login
You are at:Home»Articles»Made in Utah»Wasatch Adaptive Sports Empowers Through Recreation

Mother Nature’s playground provides a natural high to anyone recreating on her turf, and creating opportunities to nurture this energetic optimism is what Wasatch Adaptive Sports (WAS) does best. Anyone hoping to achieve independence and active living despite physical or developmental disabilities can learn the skills with the help of this non-profit organization.

“WAS exists so that individuals with adaptive needs–whether that is physical, cognitive or intellectual disabilities–can experience the sense of freedom that comes from a day spent skiing or biking,” says Peter Mandler, founder of WAS. Mandler started the program in 1977 and has seen it grow from a handful of lessons in the winter to nearly 3,000 year-round lessons annually.

Entry-level through advanced instruction of winter and summer recreational pursuits are provided for individuals with adaptive needs and their families. Based out of Snowbird, Utah with a second office in Murray, trained staff and volunteers focus on matching the student’s goals with individualized progression.

WAS uses state-of-the-art adaptive sports equipment to enable them to offer services to students of all ages and with all types of disabilities. Winter activities include adaptive skiing, snowboarding, snowshoeing, indoor cycling, and yoga. Mountain biking, cycling, paddleboarding, kayaking, hiking, orienteering, fishing, and yoga are offered in summer. Activities take place at Snowbird, Salt Lake City, and surrounding counties.

U.S. Paralympic athlete Anna Beninati can vouch for this life-changing organization. On September 5, 2011, Beninati tried to jump onto a moving freight train and fell. Three 30-ton coal cars passed over her legs, severing them instantly. After a month of hospitalization, she was discharged with above-knee amputations on both sides. The 17-year-old found herself sinking into a severe depression. Post-traumatic stress disorder, combined with an extreme loss of independence, made her feel as though she had lost her sense of purpose.

Two months later, she contacted WAS and took her first lesson in a bi-ski. Although it required extreme effort, it took only one run down Chickadee to know that it was worth it. Ski lessons became part of her weekly schedule and she eventually moved into a mono-ski. When spring came, WAS introduced her to a handcycle, and she was hooked. Since then, she became an instructor for the program and is now an athlete on the U.S. Paralympic National Team. 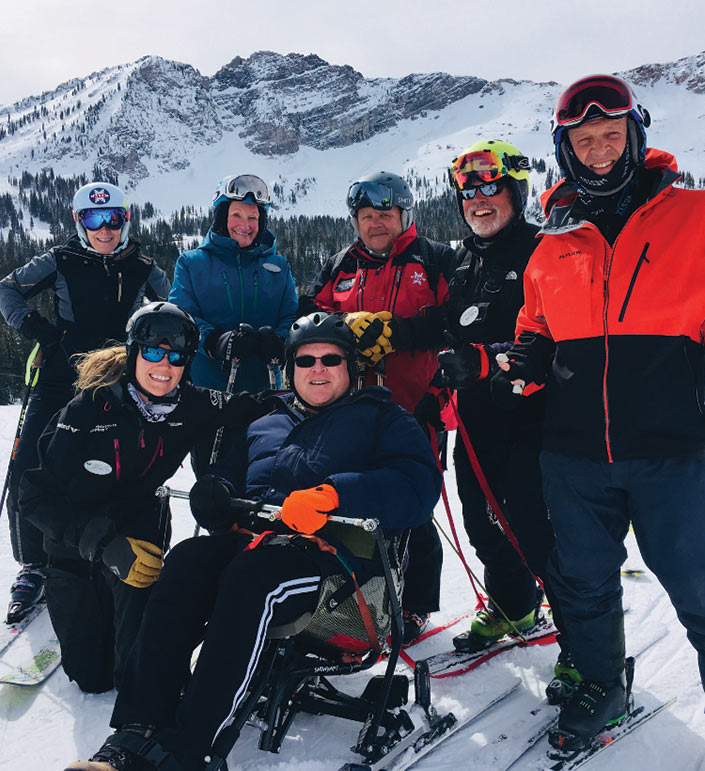 “Lifetime fitness skills are difficult to instill in people with disabilities, because we’re so often reluctant or unable to take that first step,” Beninati explains. “WAS gave me the push and the resources I needed, and because of them, I will be empowered for the rest of my life.”

Partnering with the VA Salt Lake City Health Care System, WAS also provides opportunities for recreation to veterans. Their mission is to provide outdoor recreational and social activities for veterans coping with military-related physical, cognitive, and emotional difficulties. The goal is to get veterans out of their homes and participating in activities that promote camaraderie, self-esteem, and a connection to the outdoors. WAS has served veterans from all current and past conflicts, including a 97-year-old World War II veteran who skied for the first time this January.

Over 90% of WAS students live locally in Utah. With this in mind, the organization launched an equipment rental program to combat the cost-prohibitive equipment obstacle to active living for people with disabilities. Now students come to WAS to learn the skills of recreation through private lessons and can continue applying those skills by renting a handcycle, monoski, or other adaptive devices.

No initial fee is required by WAS and they provide full or partial scholarships to 90% of participants, thanks to sponsors, donations, annual fundraisers, and volunteers. One of the organization’s biggest annual events, The Steve Young Ski Classic, kicks off its 33rd year on March 9, 2019. Professional athletes, including Hall of Fame quarterback Steve Young, Olympic, and Paralympic athletes join WAS participants at Snowbird for a recreational ski race followed by a dinner, live auction, and the chance to hear from WAS students and Steve Young himself.

For over 40 years, WAS has provided an opportunity to help individuals exceed expectations, one turn at a time. Learn more or to support their mission.