Trending
Login
You are at:Home»Articles»Made in Utah»4 Utah Beers for Summer Fun

Story and Photos By Sarah Shebek

These days in Utah, there are almost as many breweries as there are hours in a day. And as the days lengthen, it’s time to get outside and crack a cold one. While patio and porch drinking are both perfectly acceptable pursuits, sometimes a bit more adventure is warranted. Fortunately, we’ve researched a few delicious pairings and endorse the following four post-adventure Utah beers.

What goes up must continue to go up. That seems to be an accurate description for most local trails, which feature heart-pounding elevation gain right from the start. But there are a few exceptions to the rule, including a trail just minutes from downtown Salt Lake City.

The Avenue Twin Peaks Trail covers 1,100 feet in 3.2 miles roundtrip, and while there are a few steep pitches, it’s an enjoyable moderate trek through the rolling foothills that’s also frequented by trail runners and mountain bikers. More pluses: you can see your destination almost from the start, and the summit features a panoramic view of the valley and surrounding mountain ranges. And it’s still enough of a burner to merit a brew afterward.

Templin Family (T.F.) Brewing is a newer player to the Salt Lake craft beer scene helmed by Kevin Templin, the mind behind many of Red Rock’s award-winning beers. Although T.F. primarily focuses on German-style brewing, it also make a delicious double IPA called FERDA. This beer packs a punch at 8.2% ABV, but it’s sweet and slightly juicy with a long, bitter finish. FERDA comes in a 16-ounce can that’s perfectly portable for summit sipping.

The easiest outdoor adventure of all might be one of the oldest forms of exercise—running. And one of our favorite places to pound the pavement around Salt Lake City is the Jordan River Parkway Trail. This 45-mile multi-use trail parallels the river, and is the centerpiece of a network of trails stretching from Provo to Ogden.

Hop on and jog as long as you’d like from multiple access points. A quick and easy starting point close to our next brewery is the trailhead located at 17th South River Park near Glendale. You’ll ramble through varying scenery from there, but river and mountain views are always a constant, and the trail is smooth and well maintained.

Every good run deserves a good beer, but no need to overdo it. Level Crossing is another new entry in the local market, owned by a former vice president at High West Distillery. While there aren’t any whiskey barrel brews on the menu just yet, Level Crossing does have a relatively unconventional draft menu, featuring a Coffee Kentucky Common and an Oat Pale Ale. The latter is an exceptionally smooth, somewhat creamy pale with a slight tropical bitterness. Head to the brewery at the base of the iconic South Salt Lake water tower for a pint, or get a crowler to go for post-run refreshment.

The Salt Lake Valley boasts many excellent bouldering gyms, but the outdoor version of the sport is certainly a worthy (and potentially more extreme) pursuit. Bouldering is a full body workout requiring strength, dexterity, and a little mental finesse to determine the proper route up the rock. If you’re ready to take it outside, grab your shoes, chalk bag, and crash pad and head to Little Cottonwood Canyon. One great option is Little Cottonwood Canyon’s Gate Boulders, just a few minutes up the canyon. You’ll find plenty of routes to test your mettle on three large rocks a few steps from the parking lot, ranging from V2 to V11.

After an hour or two of problem solving, your body and mind will be due for a break and some Utah beers. SaltFire is one of a few breweries setting up shop in South Salt Lake, and it’s just down the road from Level Crossing. Specializing in small-batch brewing, SaltFire focuses primarily on IPAs, but also makes a delicious Dirty Chai Stout that tastes dangerously similar to its coffee shop inspiration. At 6.7% ABV, it’s a lighter stout that doesn’t skimp on flavor. No cans here, so be sure to recycle the glass bottle—if you don’t save it for the whimsical label. 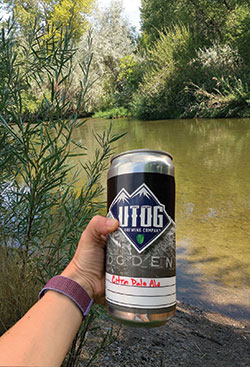 Looking for a northerly adventure? Head to the booming adventure town of Ogden for a fun float down the Weber. This river can pack a punch for summer day trips, depending on river conditions, and might feel similar to whitewater rafting on certain days. Rent tubes and shuttle through local outfitting companies, or DIY it with your own two-car shuttle. Most tubers start near Henefer and end at Taggart, and the float takes about two hours.

You’ll navigate around logs and boulders, under a highway bridge, and face a few rapids. Don’t worry—the float also features stretches of calm, relatively relaxing water. That said, drinking isn’t recommended until the end of the excursion due to the physical challenge and hazards along the way.

Once you’ve conquered the mighty Weber, take the short drive into Ogden for a brew or two at the new UTOG Brewing Company. Boasting a beautiful downtown space, it offers a full food menu and is the only family-friendly spot on this list. Sip from a rotating menu of Utah beers on draft, including a thirst-quenching Citra Pale that’s perfect on a scorching summer day. Grab a crowler to go if you’d rather drink down by the river—just remember to pack it out.

Sarah Shebek is a former Midwesterner turned Utah transplant of two years. When she›s not at her day job, Sarah loves hiking trails near and far, camping whenever possible, mountain biking, and enjoying craft beer.