Glacier National Park is mystifyingly beautiful. Its dramatic, saw-toothed aretes and ancient glaciers jut high in the sky while unspoiled expanses of land and lakes roamed by wild creatures sprawl out below. It’s hard to believe such enchanting wilderness actually exists.

The Crown of the Continent

No doubt early explorer George Bird Grinnell felt the same. He made it his purpose to get the area made a national park so its natural riches could be shared with the people and protected from land developers. Happily, Grinnell and his consortium of fellow conservationists were successful in their endeavor; on May 11, 1910, President Taft officially created Glacier as the nation’s seventh national park.

In the 108 years since, it has become a top tourist destination, now welcoming almost three million people each year. It’s among the most Instagrammed places in the United States and most pinned locations on Pinterest in the world. Often referred to as The Crown of the Continent because of its role in the collective ecosystem, Glacier National Park is considered the headwater of the North American Continent.

The Continental Divide and Northern Divide converge at Triple Divide Peak, which sends water—mostly snowmelt—in three directions, flowing all the way to the Pacific, Atlantic, and Arctic oceans. Glacier National Park is so named for the 150 or so 7,000-year-old glaciers that dominated the landscape in the late 1800s. However, these relics of a bygone era are quickly vanishing. Only 37 glaciers remain and have lost as much as 85% of their mass in the last half century due to climate change. Plan a visit this summer to see as much of the remaining glaciers as possible. At their current rate of melt, the glaciers will be gone in decades.

On the bright side, thanks to its vast frontier of over a million acres along with conservation efforts, the region has maintained nearly its entire original plant and animal species since its modern-age discovery and is a refuge for grizzly bears, gray wolves, Canada lynx, bull trout, and other wildlife that are threatened elsewhere.

Be on Your Best Bearhavior

Speaking of bears, Glacier National Park is a great place for grizzly bear sightings—ideally from afar. Everyone wants to see a bear—no one wants to meet a bear. To that end, the National Park Service recommends staying bear-aware by traveling in groups and making noise on hikes to avoid surprising them. Encounters with one of the estimated 300 that live in the park are not all that uncommon, but should be avoided, not sought. Remember, the bears won’t be the ones who have to change their pants in the case of a meet and greet.

The only bear in the park that everyone should absolutely pursue is the Huckleberry Bear Claw at the Polebridge Mercantile and Bakery near Bowman Lake. Hailed as the best pastry in the West, this claw-shaped confection is well worth the detour. 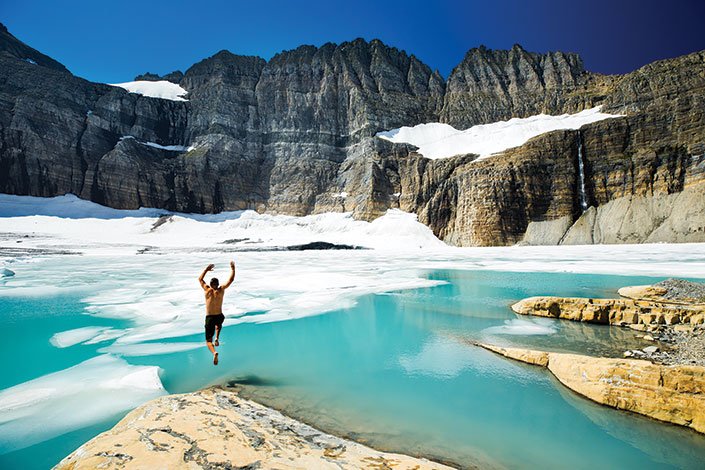 Other things not to miss during a visit include: hiking the Grinnell Glacier overlook, which leads to outstanding views of the opaque turquoise water in Grinnell Lake; watching the sunrise at Two Med Lake; kayaking or paddleboarding on Lake McDonald, which was carved out by a glacier and is the largest lake in the park; and driving Going-To-The-Sun-Road, if it’s open.

Going-To-The-Sun is one of the park’s standout features. The 50-mile, two-lane highway was completed in 1932 and spans the width of the park bifurcating the east and west. The road crosses the Continental Divide at Logan Pass and passes through almost every type of terrain in the park, from glacial lakes and cedar forests in the lower valleys to windswept alpine tundra at its peak elevation of 6,646 feet.

If Going-To-The-Sun-Road’s closed, use it as an excuse to loop around the park and visit Canada for a couple of hours. The drive from West Glacier to Fernie to East Glacier is spectacularly scenic and provides ample opportunities for wildlife viewing and other points of interest along the way, such as Canada’s Waterton Lakes National Park or Glacier’s Many Glacier and Saint Mary Lake. This is also a good way to avoid crowd maneuvering and bumper-to-bumper traffic.

Part of the Glacier National Park experience is staying at one of the historic lodges, some of which are registered as National Historic Landmarks. Just as soon as GNP gained its status as a national park, large numbers of visitors descended upon the glacial haven. To accommodate the crowds, the Great Northern Railway built a series of chalets and hotels designed to mimic mountain lodges in Switzerland. These designs, combined with the use of natural materials, were dubbed “parkitecture.”

The park is a less than a 10-hour drive from Salt Lake City, but direct flights into Kalispell, Montana are under two hours. No matter which route travelers to Glacier National Park choose, they are sure to be impressed. It’s simply one of the most awe-inspiring places on the planet and a must-see for anyone with a travel bucket list.

Planning a Glacier getaway? Pair it with these summer events.