Trending
Login
You are at:Home»Articles»Profile»Two Women of the Wasatch on Running Ultras

Trail Dames: Two Women of the Wasatch on Running Ultras

“There is an intense but simple thrill in setting off in the morning on a mountain trail, knowing everything you need is on your back.” -Paul Theroux

An ultra is defined as any race longer than a marathon, and these distances can vary greatly, from 50K to 50 miles, 100K to 100 miles, or even further. A finish at any time is an accomplishment, and the amount of grit that goes into completing these races is impressive.

In Utah, this sport has a tight-knit following that’s growing rapidly, with more runners signing up every year. Here we’re talking with two women in northern Utah already hooked on this growing sport. 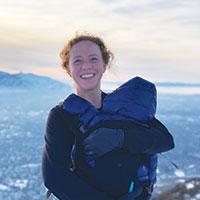 OCCUPATION: EMT in a Level 1 Trauma and Emergency Department and at the Snowbird Clinic for 10 years

Caitlin doesn’t even consider herself a runner most of the time—which is mind-boggling—and her first Wasatch 100 race happened because she lost a bet. At that point, she had no idea what she was getting herself into.

Of all the running Caitlin’s done, one of her most memorable races was the Zion 100. “I went down with the intention of supporting my then-boyfriend (now husband) while he raced the event. The morning of the race, he convinced the race director to give me a bib and convinced me to run it with him. We ran the entire 100 miles together.”

But it wasn’t easy. “There was a crazy rainstorm drenching us to the bone and turning the trails into mud so thick and deep it nearly sucked off our shoes with each step. We dubbed the race ‘mudageddon.’ We crossed the finish line together, and I ended up taking 2nd place female. Who knew signing up for a 100-mile race the morning of could turn out to be such a good idea?” says Caitlin.

However, being able to run 100 miles unexpectedly does mean that you’re already at a certain level of training. For Caitlin, training is about staying active so she’s always ready. “When a friend asks if you will run 30 miles with them in the middle of the night, you can say yes. If your husband asks you to pace him 100 miles of his 200-mile race, you can say yes. The key is to keep moving and don’t stop.”

To be a runner, Caitlin believes that the most important thing is to run. “I have learned that you can’t really get in shape for running by skiing. Or biking. Or anything besides running. Cross-training helps and is fun, but you have to run to train for running.” When asked if she trains during the winter, she says definitively, “Winter is for skiing.” So there’s that.

Beyond the physical endurance needed for a long-distance race, there’s a powerful mental game that must be played. Every runner experiences highs and lows, but getting to that finish line requires you to push through all of it.

Of that mental game, Caitlin’s been inspired by her dad. “When I was young, my dad would tell us that if we could finish our dinner, we could finish anything in life. It’s also good to realize that the low points will come. Doubt, exhaustion, pain, the demons…in an ultra event, they’re coming. Just expect that so when they show up, you can acknowledge them and keep moving. And ‘right, left, repeat.’ It’s best not to look at how much further you have to go, but break it down into smaller pieces. To the next aid station. To the next tree. Whatever it takes.”

Sometimes, when you’re hitting a low on a race, a little encouragement can be the thing that gets you to finish. Most ultrarunners have pacers or other support during a race. For Caitlin, it’s personal. “You have to believe you can do it. I never doubted that I could run 100 miles. If other people were doing it, it could be done,” she says. “It also helps tremendously to have the support of my husband: he just gets it. I’ve had friends and family show up to local races, which is so encouraging to see familiar faces when you’re tired and beat down.”

Caitlin Loertscher out on a trail run.

She’s gained a lot through ultrarunning, and even met her husband DJ through the sport. They had a unique dating experience, getting to know each other through running, racing, traveling for races, and pacing each other at events. They learned what each is capable of and can encourage one another to a higher potential.

Caitlin recently became a mom and has been able to incorporate her love of running with starting a family. Her son is three months old and has already been up West Grandeur, Lake Blanche, and several other trails from the comfort of a pack on his mother’s chest. He naps while she hikes, and the movement seems familiar to him, since he came along for her runs in the womb.

And Caitlin says if you think your running game is over when you have kids, think again. “Moms earn some kind of superpower after having kids—childbirth was way harder than any 100-mile race I’ve ever run. Most of the fast ultrarunner ladies I know have kids; I’ve even seen women pumping at aid stations. I look forward to testing out my theory and seeing if I, too, have new superpowers after bringing baby Henry into the world. Encouragingly, the average age of ultrarunners is higher than you’d think: a lot of the fastest and most experienced runners are well into their 40s and even 50s.”

And for most of these runners, there’s a strong why to their runs. “Some are replacing other addictions with an addiction to running. Some just like to push their limits to seemingly crazy extremes, and others like to eat all the food so they run all the miles. For me, there’s a language spoken by the mountains that can’t be translated into our own tongue. When I’m on the trails, the non-necessities become obsolete and what’s left is the essential. I love getting away from the hustle and bustle and into the fresh air to just run and clear my mind and enjoy the awesomeness of nature,” says Caitlin.

And while the sport of ultrarunning is booming, Utah’s scene still offers a great sense of community. Though it’s grown too large for all runners to know one another, there are still friendships forged on the trails, plus support and bonding with diverse, happy people. 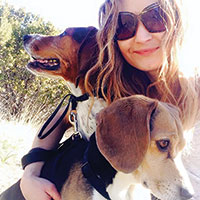 Tara’s been running since her teens, ran road marathons in her 20s, and got involved in ultrarunning in 2016. First and foremost, Tara runs to have fun. She doesn’t wear a watch or keep record of her runs. She views running as an experience to push herself and to take time to appreciate the beauty along the way.

Tara was introduced to ultrarunning in 2004 when she paced her dad, Wade, in the Bear 100. At that point she was inspired, and it planted a seed. Since then, she’s run an impressive number of races, and says that the lifestyle and the community is what keeps her coming back.

“It’s a lifestyle of achieving personal goals in the most beautiful places in the world. You get to experience nature in a very personal way; ultra trail running will put you in touch with yourself through nature,” says Tara. “And the ultrarunning community is incredible. You meet the most humble and inspiring people out on the trails.”

Talking about training, Tara’s training fluctuates depending on the season and what distance of race she’s preparing for. She does a combination of running, strength training, and yoga, and all of her running is done on trails. During the off-season, she logs 30 miles a week, and as many as 70-80 during the weeks before a 100 miler. She doesn’t take winters off and has two energetic dogs that need to get outside, regardless of what season it is.

“Winter running can be an amazing and diverse workout. It will prepare you for unpredictable weather during races. A lot of people avoid the trails during cold weather, which makes them very peaceful,” says Tara.

Her two dogs, Elliot and Blue, are high-energy hound dogs that love being on the trail with her. “It became apparent after adopting the second dog that I would need to spend more time on the trails. In their younger years, they would be with me logging 50–60-mile weeks. As they have gotten older, we have scaled back to 30-mile weeks.”

And she loves the company, even with its challenges, “I am so grateful to have my dogs on my runs for companionship and safety, but it is not always easy. It takes training and patience to get a dog trail-trained. Having said that, they are the most motivating and fun adventure partners you can have.”

For Tara, success in ultrarunning means doing it as long as possible. She wants to be able to run for many years to come so it’s important for her to be consistent and to listen to her body, but she still loves breaking records and going further while keeping it in perspective.

Tara McFarland out on a trail run

Of the mental game required for ultrarunning, Tara believes the mental and physical aspects go hand in hand. “They both grow stronger with practice. Just like the body benefits from training and racing, the mind gets stronger the more you push it. One thing you’ll learn with long-distance running is that the mental lows will pass. Social support is a perfect boost to your mental game. Family and friends, pacers, support crew, and fellow runners are priceless. The more people you have believing in you, the better you will perform physically and mentally.”

The ultrarunning community is what keeps Tara coming back for more, and she’s found some of her closest friends through the sport. To those looking to dive into it, she encourages, “Don’t be intimidated! Start somewhere and keep going! You will never regret it.”

Ready to run an ultra? Check out these local races ranging from 50 kilometers to 100 miles.