The cold wind pushed the waves, sending them crashing up the snowy shoreline. Even with her wetsuit and layers, Robin felt the chill of Utah’s winter wind. Despite the weather, she snapped on her lifejacket, grabbed her paddleboard, and angled it into the water, watching as it bobbed in the shallows. Looking around at empty Willard Bay, she felt a thrill as she began paddling away from the shore. Maneuvering past clumps of ice, she focused on balancing as she paddled past snowy shorelines and mountains, thinking back to how she found herself here on a snowy January day.

Like most water recreation, stand up paddleboarding typically takes place in the hot summer months. Mountain lakes and icy reservoirs are serene, quiet, and devoid of recreationists in winter months—except for my daughter, Robin. Robin is a Medical Assistant at a busy Utah clinic and a mother of three children ages seven to 17. Like most people, she balances a busy schedule, but it’s now even fuller as she’s challenged herself to SUP every month, even in winter.

Robin began SUPing in the summer 2017 when she visited East Canyon with her eldest daughter, Tahlia, for a cheer team boating activity. While they stood on the shore, waiting their turn, they decided to rent a paddleboard and try it out. 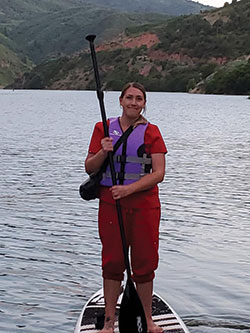 Robin at Causey Reservoir in the fall.

“It was difficult to balance at first,” Robin says, “But after a few tries, I fell in love.” Since then, she’s taken all three kids throughout summer and enjoyed the freedom gained by her ventures on water.

Out on the water, she is alone, finally. Robin finds her peace (and herself) when paddling “It’s the place I can be unapologetically ME and not worry what anyone says, or think, or does. My world can stand still for those few hours,” she says. “I’ve learned how strong I can be, and what I can actually accomplish by myself.”

Robin believes her head clears when she paddles. The gentle rocking of her paddleboard’s become her therapy. “I’ve learned a lot about myself this last year. I’ve learned what I like, what I dislike…and my passion for the outdoors remains unchanged,” Robin says. “The first time I got on a board, I was hooked. It’s a release for me. When I’m out on the water, I have no worries.”

Robin’s commitment to SUP every month of the year means her inflatable paddleboard is often stuffed in the trunk of her car, and she takes it with her when she travels. “I have a current streak of consecutive months of paddleboarding since March 2019, and would just like to go to as many places as I possibly can,” Robin says. She’s already paddled at many Utah reservoirs, Laguna Beach in California, and Ocean Shores in Washington with more trips in the works.

In Ocean Shores, Robin paddled out into the choppy sea, and although rougher ocean waves proved challenging, she stood. Ocean SUP isn’t easy, and she and her dad were alone beyond the rocky barrier. Hazards proved more obvious, as currents can be swift and unforgiving if you misjudge. They stayed within sight of the shore, and eventually made their way against current and wind into the rocky barrier of smoother waters and back to a safe shore. But neither knew how difficult open-water paddling would be until they were out on the water. 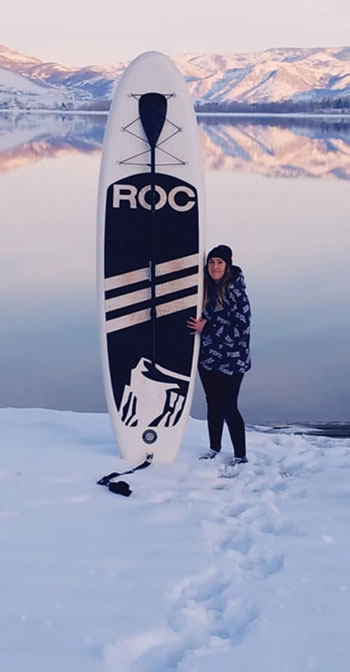 Winter trips can be even tougher. In December, piled up snow made paddling at Ogden’s Pineview Marina nearly impossible. But with determination and a pair of snowshoes, Robin climbed up powder and snowdrifts until she came to the water’s edge.

While most who SUP in winter bring specialized gear to stay warm, Robin braves the cold. “I just put my board in at an angle at a semi-deep part so the fins don’t scrape, then I climb on and push off,” she says. “I did buy some neoprene socks/booties, and I wear a wetsuit in case I fall in, but I’m just really careful.”

Robin plans are to continue her quest to SUP all year long, adding pursuits like camping, backpacking, hiking, and snowshoeing to the mix—even bringing her kids along for some adventures.

“My bucket list is getting quite extensive, but as far as paddleboarding, I’d like to plan an overnight- or two-day trip, down a river just me and my board,” Robin adds, “and maybe a friend or two.”

Tirsea McNeal is a retired writer and artist. She studied English at Weber State University and now lives in a remote home on the Washington Peninsula with her husband of 40 years and three dogs. She loves outdoor adventure and exploring Utah’s Uinta mountain wilderness, southern canyonlands, and deserts.