Trending
Login
You are at:Home»Articles»Made in Utah»Riding the Salt Lake Brew Byway

Biking and beer: so hot right now. And thanks to a surging craft beer scene in Salt Lake City, it’s easier than ever to combine a cruise with some brews. Some of the hottest new breweries in town are located within a three-mile radius, so not much pedaling stands between you and your next pint. Try this itinerary for a well-rounded sample of the Salt Lake Brew Byway—just remember to hydrate along the way!

Fisher offers a spacious, modern tasting room reminiscent of those in brew meccas like Denver or Portland. They’ve embraced the industrial roots of the Central 9th/Granary neighborhood, and the brewery emerged from a space that previously housed an auto body repair shop. Inside you’ll find a diverse array of taps, including multiple beers on nitro, and food trucks regularly set up on the back patio.

What to Try
The saison was our favorite of Fisher’s standard offerings, with floral notes and a mild Belgian yeast backbone. But don’t shy away from the specialty beers on tap; they rotate regularly and showcase the brewers’ creativity. We enjoyed the Yellowbelly Amarillo Sunshine pale ale and a nitro coffee stout.

Biking Accommodations
Fisher is located at the intersection of 800 South and 300 West; the 800 Southside features a bike lane in both directions. The brewery’s bike rack is conveniently located within a stone’s throw of the front patio, and has enough room for at least 15 bikes. Crowlers are available for easy on-bike transport.

What started as a tiny brewpub in the Avenues has evolved into a full-fledged downtown brewery, complete with a separate restaurant and tasting room. Proper is the brainchild of Rio Connelly, who formerly worked at Epic Brewing. You’ll find a large patio on the restaurant side and a smaller front patio on the brewery side along with fun indoor games, including skeeball and shuffleboard.

What to Try
Indecisive drinker? You can purchase samples of anything on the beer board (including bottles), and we enjoyed a gruit, a Belgian-style tripel IPA, and a strawberry saison. If you’re craving something more unique, try a beer cocktail, like the Goserita—a combination of Lake Effect Gose and tequila.

Biking Accommodations
Proper sits squarely on Main Street, which has a bike lane for miles in either direction. The bike rack is a bit smaller than Fisher’s–and it’s located a little more out of sight from the brewery than we’d like–but it comfortably holds multiple bikes. Once again, crowlers are available. 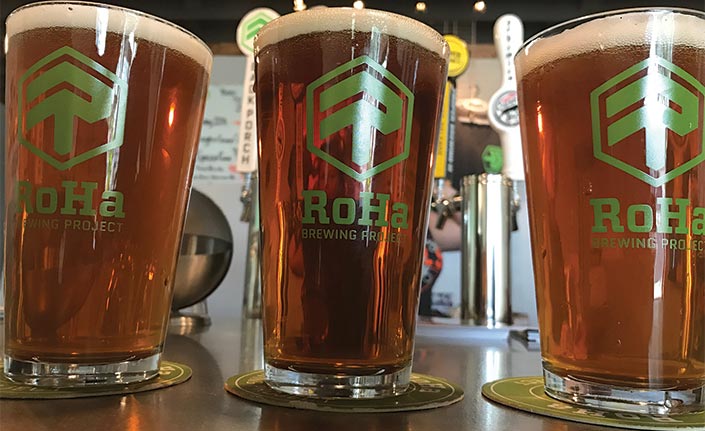 To find the city’s newest brewery, take a short jaunt down Main Street from Proper. RoHa opened this April, and features a small but pleasant modern taproom with just a dozen seats. Chris Haas, the head brewer, worked at both Squatters and Desert Edge before moving on to open his own space. Although RoHa is the new kid on the block, the industry is already taking notice—both the Kensington Grand Saison and the Thursday IPA won bronze medals from the North American Brewers Association.

What to Try
If you drink in the taproom, sample the Back Porch Pale or the Three Deep American Ale. At the time of publication, these are the only two house beers on tap, but they are extremely drinkable, with solid bodies and balanced flavors. RoHa also offered two local guest taps during our visit, and you can also take cold bottles and/or cans to go of the grand saison, IPA, and double IPA.

Biking Accommodations
As another stop located off the Main Street corridor, RoHa is easy to reach via bike at any time of the day (convenient, since they open at 11 a.m. Monday-Saturday). There’s a small bike rack right outside the taproom so you can hitch your ride before heading in for a brew.

Although it’s a bit further south of downtown, Shades of Pale is still less than three bike miles from Fisher. Continue down Main Street, then turn on Utopia Avenue. Go around to the back for the entrance, but don’t expect bike parking. Take your ride inside instead, or bring it onto the brewery’s spacious back patio. The space is a bit unique, with an unfinished, warehouse vibe—fitting, since the building is an old meat packing plant. Don’t be intimidated, though. The staff is friendly and knowledgeable, and the selection of styles is excellent.

What to Try
Seek out the bottled Brett saison with tart cherries, one of the finest examples of this style in the state. But if you miss out on it, try one of the Hogshead Reserve beers, a limited edition, rotating barrel aged selection. The most recent additions? A Belgian Tripel and Quad, both of which pack a punch.

Biking Accommodations
It’s easy to reach via bike off the Main Street corridor, but there’s no dedicated bike rack outside. An employee recommended bringing them inside for safekeeping. Cans or crowlers are not available, so consider bringing a lightweight growler. 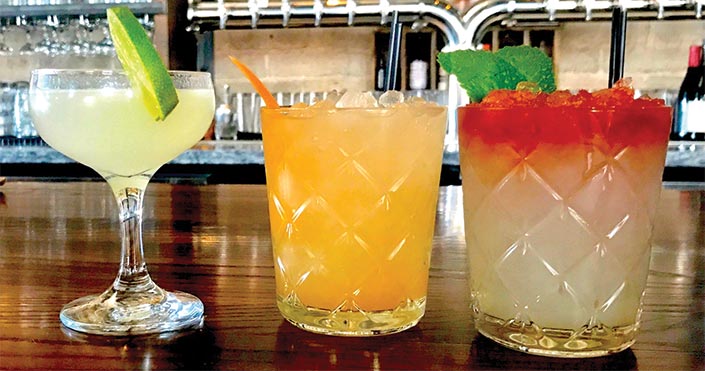 Now for Something Completely Different: Cocktails

While the brewery scene is certainly up-and-coming in SLC, we’d be remiss to ignore the fact that this area of town is also excellent for cocktails. Visit Purgatory (62 East 700 South) for wild cocktails, including a champagne and cotton candy creation. Don’t miss their equally creative and delicious food menu, and take a break on the expansive back patio.

For a more traditional vibe, hit nearby Tinwell (837 Main), Proper’s next-door neighbor. Enjoy classic cocktails from a super-knowledgeable staff, and ask to hear the story of its dive bar transformation.

Sarah Shebek is a former Midwesterner turned Utah transplant of two years. When she›s not at her day job, Sarah loves hiking trails near and far, camping whenever possible, mountain biking, and enjoying craft beer.