Trending
Login
You are at:Home»Articles»Probiotic Power

After a long, tough run, capped with a half-mile hill climb, you’re spent. To quench your thirst and restore your spirits, you uncap your water bottle and take a long, refreshing sip of…fizzy sour milk?

Believe it or not, kefir—a drink similar to thin yogurt that’s been consumed for centuries in the Caucasus Mountains—and its fermented relatives may be an important addition to your training diet. Mounting research shows that these traditional foods (and their modern supplement cousins) offer a range of benefits that can positively affect your athletic performance. 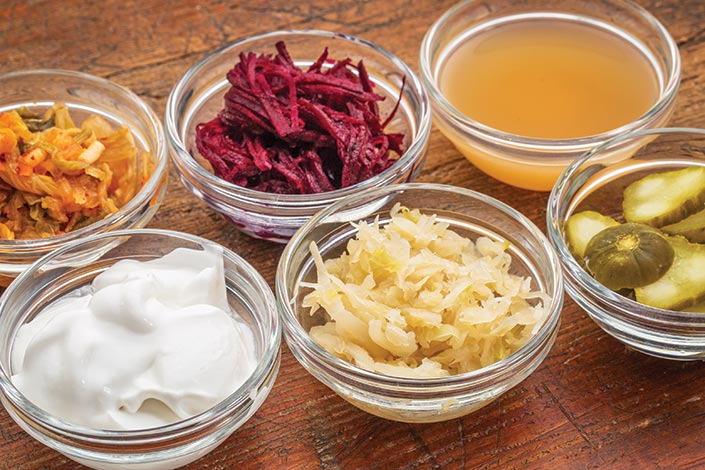 Probiotics: What Are They?

You’ve doubtless heard (maybe from one of those inescapable yogurt commercials?) that “probiotics” are a good thing that you should be consuming regularly. But behind that nebulous term, which literally means “for life,” is a wide variety of tiny bacteria and yeasts with the ability to colonize the human gastrointestinal tract. Once they’re established, these organisms are known as the “gut microbiota” and can confer a number of benefits on their hosts, from crowding out disease-causing pathogens to fighting infections.

Which foods contain probiotics? Yogurt containing live cultures (primarily Lactobacillus bulgaricus and Streptococcus thermophilus) is the most familiar and most intensively studied source. Researchers in the early 20th century first theorized that Bulgarian peasants’ heavy consumption of yogurt might be responsible for their longer lifespans and overall better health compared to their peers in other places.

But yogurt’s not the only (or necessarily the best) source of probiotics. In addition to kefir and other dairy products, foods such as sauerkraut, kimchi, miso soup, kombucha, and sour pickles all include them. Their common thread: All are produced via natural fermentation processes that encourage “good” organisms to grow while slowing or stopping the growth of their “bad” counterparts. To this end, all require warm environments and starter cultures to develop their distinctive tangy flavors, produced by colonies of billions of bacteria.

Probiotics’ most researched (and most intensively marketed) benefit is their ability to help regulate digestive health. Regular probiotic consumption is linked with lower incidence of both diarrhea and constipation, as well as reduced gas, bloating, and other “tummy trouble” symptoms. For many individuals, especially those with irritable bowel syndrome or other chronic gastrointestinal issues, these benefits may be reason enough to consume probiotics. But for athletes at every level of intensity and competition, there are even more reasons to add these foods to your diet.

If colds and coughs tend to sideline you during the winter months, probiotics may help keep you in the game instead.
A recent study of 33 elite athletes demonstrated that supplementing with a multi-species probiotic was linked to fewer upper respiratory tract infections. Researchers suggest that while intense exercise increases levels of the immune-suppressing amino acid tryptophan, probiotics help keep tryptophan in check and your sinuses clear.

Probiotic-rich foods may also help shorten post-exercise recovery time. In a group of athletes subjected to super-strenuous exercise, those who consumed a probiotic supplement experienced substantially shorter periods of soreness and less muscular damage than those who supplemented with protein alone.

Already relying on protein and micronutrient supplements to keep your body in top condition? Probiotics help enhance protein absorption and synthesize both B vitamins and Vitamin K. (Read more about the role of micronutrients in your training diet in “Micronutrients, Mega Benefits” from the Winter 2015 issue.)

Finally, while you may exercise in part to keep your heart healthy, intense exercise also produces short-term spikes of C-reactive protein (CRP), a substance produced by the liver in response to inflammation and a strong indicator of possible coronary disease. Athletes who drank kefir twice a week had lower levels of CRP after exercising than those who consumed a placebo beverage, indicating that probiotics may help protect you from cardiovascular damage.

For die-hard probiotic devotees, seemingly no food source is too sour, slimy, or just plain weird. Witness the popularity of kombucha, that fizzy, lightly alcoholic drink that’s produced by a sticky mat of bacteria and yeasts called a SCOBY…or of natto, a stringy concoction of fermented soybeans that’s perhaps best described as “an acquired taste.” However, even if your tastes run more to the mainstream, there are plenty of less-challenging ways to incorporate probiotics into your diet.

Naturally pickled vegetables, from cabbage to cucumbers, are a great source of health-promoting bacteria. Look for products that include “naturally fermented” and “unpasteurized” on the label, or try your hand at making your own. Sandor Katz’ book Wild Fermentation is an informative, entertaining read to get you started.

Yogurt and kefir provide the health benefits of dairy protein in addition to probiotics. Try adding them to a smoothie or simply stirring in a tablespoon of low-sugar fruit spread if you’re not a fan of their sour taste. Lifeway offers a range of fruity-flavored kefir drinks perfect for drinking on the go.

Prefer your probiotics in a pint glass? Unfiltered, unpasteurized beers offer a healthy dose along with good cheer. Look for Belgian sours, varieties with live yeast, or anything made according to “ancient” or “traditional” recipes (Dogfish Head has a great and diverse range).

If you’re into supplementation, look for an option that includes the genus, species, and strain of each type of organism included (such as Lactobacillus plantarum 17C) as well as the number of individuals guaranteed to be alive at the use-by date. Third-party certification by an organization like ConsumerLab or USP is another marker of quality.

And if you’re already exercising regularly, you’re ahead of the game. Exercise is associated with both higher levels of “good” gut microorganisms and a greater diversity of microbiota species, meaning you may already be carrying around a probiotic factory in your belly.