Trending
Login
You are at:Home»Articles»Profile»Half Marathons for All

David Bell’s Quest to Bring Distance Running to Everyone

Story and photos by Don Macavoy

David Bell has pride in his voice as he describes his three criteria for a perfect half marathon course, “It has to be beautiful, it has to be fast, and it has to have a unique element to it.” Using this criteria, he’s developed Utah races that keep people coming back to set PRs, run unique courses, and be part of the growing community he’s built.

From participating in his first race at age of 6 with his father to his first marathon at 17, running has always been a part of David’s life. “My dad loved running, so that’s what we did growing up was to go run together,” says David.

After graduating from BYU with a degree in manufacturing engineering, he opened a shoe store called 26.2 Running Company, which became a big part of Utah’s running community. This led to David’s decision to start Runtastic in 2010; one year later they held their first event—the Timpanogos Half Marathon.

Since that first year, David sold his shoe store to focus solely on growing Runtastic and creating better events for runners: “I want to give people something they can work toward in racing. I want to motivate people and give them something that will be lasting and memorable for an accomplishment or a purpose they ran for. That’s what keeps me doing it,” says David. 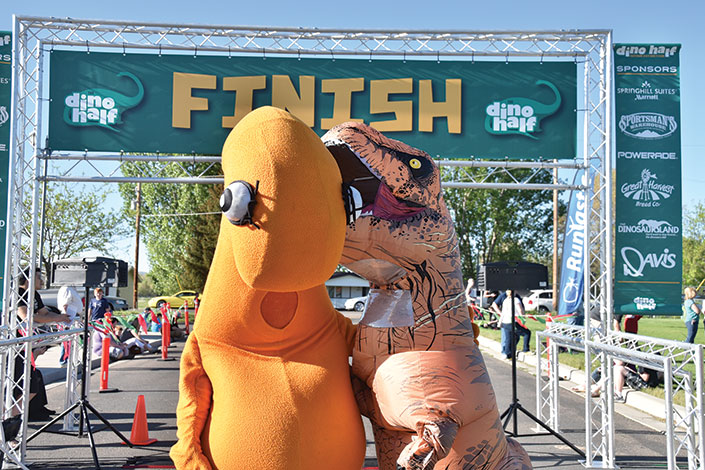 Runtastic now has seven half marathons throughout the year, recently adding the Heber Half to its roster. While average race registrations in the U.S. have fallen in recent years, Runtastic has maintained a 10–30% growth, becoming more popular each year.

Why? Because along with creating interesting, runner-friendly courses, David takes a personal interest in making sure all runners go home with quality swag. Photographers stationed along the course and after the finish line provide free photos. He works with artists and designers to create distinct medals and comfortable shirts with exclusive graphics that people actually want to wear.

And if a participant completes three Runtastic half marathons in one year, they receive a special Trilogy medal commemorating their achievement. Last year over 800 participants “Trilogized” and several thousand ran at least two races.

It’s All Downhill From Here

Another thing that really sets these races apart is the elevation change. While many races have a dreaded hill section, Runtastic races start at the top of a canyon and drop anywhere from 1,200 to 3,400 feet in elevation.

After the success of the Timp Half in American Fork Canyon, David expanded to feature the unique beauty of other canyons like Dry Fork Canyon in Vernal and Provo Canyon. The downhill element encourages runners who may be hesitant to make the jump from a 5K or 10K to 13.1 miles. The mental edge helps, but with gravity on their side, 50–70% of runners report setting PRs on Runtastic courses. 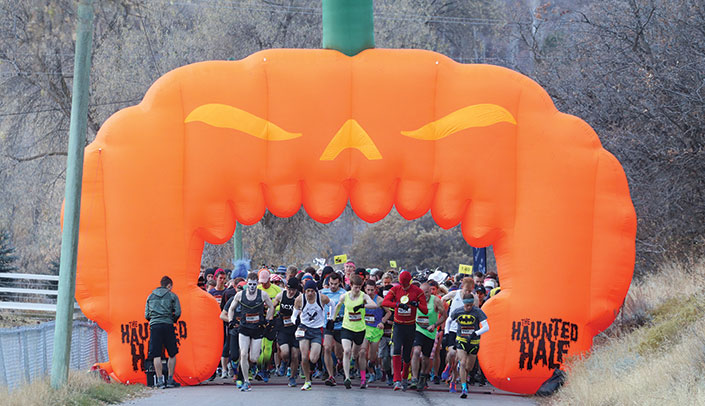 The Haunted Half Starting Line

David ensures that every course meets his criteria so each race feels like its own singular experience. Creative signage along the way adds to the enjoyment, and a unique, artistic medal awaits at every finish line. The two Haunted Half events have the added fun of (almost) everyone running in costume, special photo backdrops, and costumed volunteers from local haunted attractions.

The Thankful 13, which runs every Thanksgiving morning, features David’s favorite element. At registration each participant can submit things they are thankful for. The staff choose their favorites and print them on signs that line the 13-mile course.

David says it inspires people not only to run, but to be thankful for things in their own lives, “It’s a great way for people to start Thanksgiving with so much gratitude in their hearts.” People love seeing their words so much that they will often pick up the signs and carry them above their heads proudly to the finish line.

Working with prominent local charitable organizations is another important facet of Runtastic. The Mt. Nebo race partners with Addict to Athlete, an organization whose mission is to establish and maintain sobriety in recovering addicts by promoting healthy and lasting lifestyle changes through exercise. The Timp Half works with the Huntsman Cancer Institute to raise money for cancer research, and several other races partner with Kids on the Move, which helps families with children with developmental disabilities.

By creating one-of-a-kind events that feature the incredible natural beauty of Utah and partnering with local charities, David has created an ever-expanding community of runners around the state. Sadly, his father passed away in 2015, but David wants to carry on his legacy and his family’s tradition of running that’s brought him so much joy. Experience it for yourself by registering for a Runtastic race at runtasticevents.com. 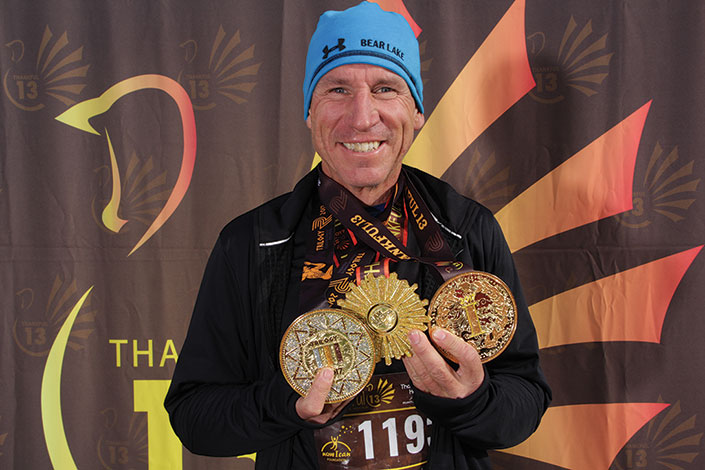 Don Macavoy is a freelance photographer and writer living in Salt Lake City–when he isn’t traveling the world. He loves hiking, biking, skiing, and disc golf as well as finding the best craft beer and vegan food in every city he visits. He writes for his website dontworryimfinite.com and can be found at @travelfinite on Twitter and @dontworryimfinite on Instagram.