Trending
Login
You are at:Home»Adventure»Watersports»BYOB (Bring Your Own Boat)

How to Get the Best River Permits in the West

What are the most coveted permits for private (non-commercial) river trips in the West? Rivers that flow through protected wilderness areas have the lowest odds of launch date victory but are well worth the trouble it takes to win entry. May the odds be ever in your favor.

To achieve DIY paddling glory in the Grand Canyon, Selway River, and Gates of Lodore, you’ll have to have a qualified trip leader who has a working knowledge of whitewater safety, general first aid, river equipment repair, technical maneuverability skills, and solid experience on rivers of similar complexity. Everyone in your crew must follow all of the rules and regulations set forth by the powers that be, and you’ll have to BYOB (bring your own boat), obviously.

There’s a reason the Grand Canyon is considered the granddaddy of rafting trips in the West. It features 80 big water rapids along 225 miles of the mighty Colorado River from the put-in at Lees Ferry to the take-out at Diamond Creek. It also takes between 12 and 25 days to complete—which, by the way, is more vacation days than the average American takes over the course of two years.

In addition to your absent-from-work eligibility, you’ll also have to be one of the lucky winners of the weighted lottery system the National Park Services uses to determine which paddlers will be granted one of roughly 465 permits given each year for private river travel through Grand Canyon National Park. Typically, there are more than 4,000 annual applications.

Winners are randomly chosen by a computer. If you don’t get a spot in a given year, the next time you try, your chances will increase and your new application will be given more weight than those applying for the first time and those who won during the previous year.

Lest you think that’s a horrible, no good, very bad way to gain access to the mother of all river trips, consider this: Prior to 2006, a wait list was used to assign river launch dates—waiting 16 to 25 YEARS was the norm.

Once you’ve created a profile on recreation.gov and submitted and paid $25 for an application, you’ll have to wait for the next lottery, which is held each year at the end of February for the following calendar year. Applications are accepted online for the first three weeks of February. If you score a launch date, you’ll be charged a non-refundable deposit of $400, which applies toward final permit fees. Final permit fees are $100 per person and must be paid 90 days before launch. Follow-up lotteries are held as needed to reassign canceled and/or leftover trips.

Idaho’s Selway River is the most challenging river permit to acquire, with just one launch granted per day during its short, controlled season lasting just 62 days from May 15 through July 31. On average, more than 3,300 applications are submitted each year to run these waters. Less than 2 percent win admittance. Harvard University’s acceptance rate is 5.9 percent. Just saying. The Selway is protected as a nationally designated Wild and Scenic River, which is why so few permits are distributed.

Most Selway-farers take five days to go the 47 miles from Paradise to Race Creek. It’s a dynamic river known for its solitude, Cutthroat trout fishing largess, and handsome number of Class II–Class IV rapids. It drops an average of 28 feet per mile—50 feet per mile near the Moose Creek section.

The Selway has its own randomized lottery and applicants can list up to four dates per application. The lottery is drawn mid-February. All hope is not lost if you don’t get a launch date; you can check for cancellations each day of the control season by visiting the recreation.gov website between 9 a.m. and 10 a.m. MT to see if there is a new availability. Caveat emptor: Even if you do happen to obtain a permit, if the water level gets too high you’ll have to cancel your trip. 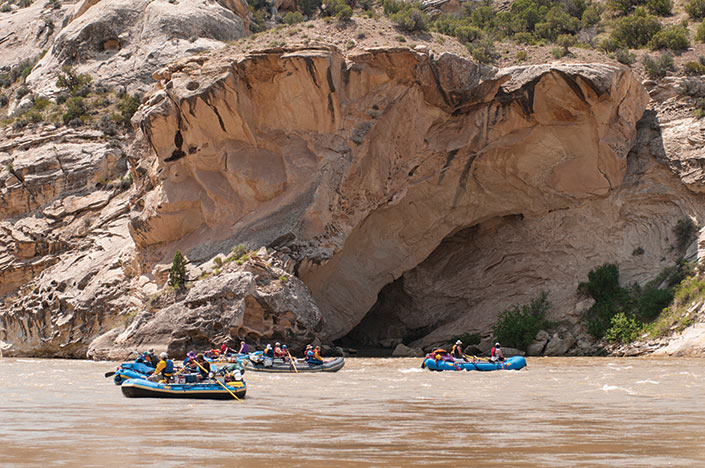 The Gates of Lodore

It’s fun to say, isn’t it? One of John Wesley Powell’s mateys named the passage for the poem, “The Cataract of Lodore,” by Robert Southey, after successfully navigating its treacherous waters. This was the first major canyon they encountered during their famous 1869 expedition, which led them to the eventual first odyssey (of settlers) through the entirety of the Grand Canyon.

Gates of Lodore river trips put-in at the ranger station in the northern area of Dinosaur National Monument in Colorado and flow southwest from Colorado to Utah along the Green River, meeting up with the Yampa River confluence before ending at the Split Mountain take-out. It takes four days to run the challenging 45 miles of Class III–V rapids through the towering canyon walls of Lodore.

Because this river trip runs smack-dab through a national monument, only 300 multi-day launch permits are awarded through a lottery system each year. Approximately 7,000 people apply for this enviable permit. If you want a piece of this whitewater action, you’ll have to meet all the standard equipment and safety requirements for self-guided travel through the Monument, and, of course, you must first win the lottery.

Each December, the Monument River Office begins accepting lottery applications for use during the high season launch dates (the second Monday of May to the second Friday of September) for the draw held in early February. Leftover permits are available through the recreation.gov website on a first-come, first-served basis.

River hustling is not and should not be—for everyone. You can certainly skip the hassle and defeat of permit gambling by signing up for a commercial expedition instead. You may pay through the nose, but if you’ve got the money, honey… well, you can get your fix.