The fastest male mountain bike racers on the planet gathered to test their mettle at the 2017 UCI MTB World Cup Downhill Race on July 8. Overnight rain helped stabilize the loose, steep course, which traveled about 1.25 miles down the mountain to a spectacular jump finish visible to spectators. The scenic venue featured stunning lake and mountain view, and huge crowds gathered to cheer their athletes on down the course.

Competitors raced under the hot sun on the Swiss mountainside of Lenzerheide at top speed toward the finish, some crashing on the way and others wowing the crowd with big jumps. But the day’s most anticipated event came at the conclusion, the day’s final run: American Aaron Gwin. 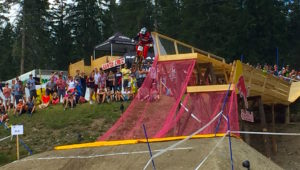 Gwin, the day’s fastest qualifier, roared down the mountain at a pace 1.5 seconds ahead of the current first place man, onlookers cheering him for what looked like a certain victory. But his dream of standing atop the World Cup podium was quickly crushed when the tire of his bike ripped off the rim near the finish.

Despite Gwin’s untimely tire blowout, the USA still had a high-ranking finisher in the UCI MTB World Cup Elite Men’s Downhill Final, Luca Shaw, a Santa Cruz team rider, who placed 6th overall out of 78 competitors from around the world.

Watch all the action go down on this replay of the downhill races courtesy of Red Bull.

See how other Americans and other competitors placed in the official race results. 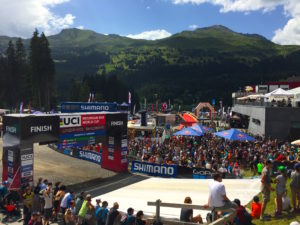 The crowd gathered to watch the men’s downhill finals.

This year was the final UCI MTB World Cup in Lenzerheide before they host the World Championship in 2018. Learn more about this and other upcoming World Cup events.