Second to last day of summer vacation. We’re heading to Subway Cave, just outside Lassen Volcanic National Park in northern California. Subway Cave is a classic lava tube, about 1/3-mile long, and a quick stop off the highway. Perfect for the end of a 12-day road trip. 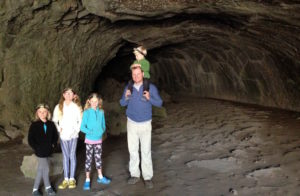 Other than just near the entrance and exit, the cave lies in total darkness. We had equipped our kids with LED headlamps. Their flood beams on the soft grey and black volcanic stone lit the way for about 30 feet, enough to navigate by. But I had brought along a new toy to light my path: a Fenix PD32 flashlight. In the photo, it’s in my left hand, camouflaged against my son’s dark jeans. So, how did the light perform?

There’s High, and then there’s Turbo

I was excited to try the PD32 in something other than a dark storage room. I thumbed the rubber switch at the light’s base. Cycling through the five brightness settings with the light pointed into the heart of darkness, I was impressed with each new setting. Even on High (400 lumens) I could clearly see where the cave turned a couple hundred feet away. When I switched to Turbo (900 lumens), the sudden burst of light was almost shocking. So bright and so well-focused on the distant cave wall. It was as though I were looking down a tunnel at a lighted room. My kids even whined for me to turn the light down because it robbed the cave of its mystery. I ended up switching to low or medium (50, 150 lumens) for the rest of the hike. 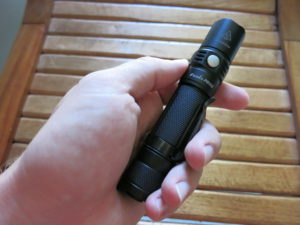 At just over 5 inches long and weighing in under 3 oz (w/o batteries), the PD32 fits the hand nicely. The on/off switch at the base of the light can be operated with gentle pressure for a momentary burst of light, or pressed firmly to keep the light turned on. A stainless steel button near the head of the light is used to cycle among the 5 cycles (Eco-Low-Med-High-Turbo). Pressing the mode button for a half-second switches the light to strobe. An SOS mode is also included.

The PD32 feels solid in the hand. The battery access operates smoothly and accepts either two CR123a batteries or one 18650 Li-ion. (Pro tip: CR123a are much less expensive, but 18650 batteries are rechargeable.) Reported runtime is up to 260 hours in Eco mode–just under two hours in Turbo. The

Waterproof to two meters, this is a light built for the rigors of outdoor activity. Throw it in a pack or pocket, stow it in it’s included holster, or clip it to a belt. The Fenix PD32 is not just a light cannon. It’s a durable tool useful for just about any activity, indoors or out, when you need reliable lighting.

Find out more at FenixLighting.com