Ultrarunner Cory Reese knows that slow and steady may not win the race, but it will get you across the finish line.

Reese, a 38-year-old social worker, lives in Hurricane with his wife, Mel, and their three kids. Always up for a challenge, he ran a marathon in 2009 and soon discovered his passion for running on trails. He completed his first 100-mile race in 2011 and now has more than 20 ultramarathons under his belt. “I’m not necessarily a gifted athlete,” he admits. “I’m not fast, but I just use perseverance and tenacity to my advantage.”

Reese’s everyman charm and seemingly unending optimism have endeared him to the local running community. “He’s so personable, so friendly, and so happy. He’s so relatable to everybody,” says Steve Hooper, owner of the St. George Running Center. “People see him out there accomplishing these great things—it inspires them to want to do something different, something amazing in their lives.” 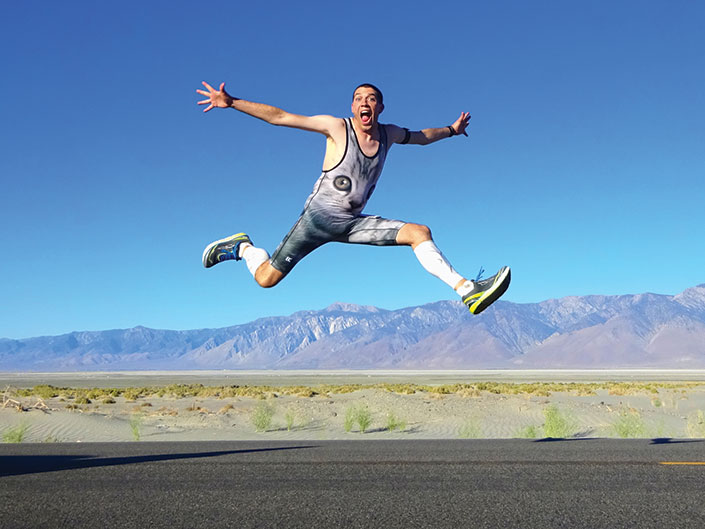 Last October, he ran the St. George Marathon four times back-to-back—joining the rest of the field on his last lap—04.8 miles total.

Reese craves the challenge of seeing how far he can push himself. This year, he fulfilled a longtime dream by applying for entry into Badwater, a 135-mile trek from Death Valley to Mount Whitney in the middle of summer billed as “the world’s toughest foot race.”

To prepare his body for the extreme conditions, he trained during the hottest part of the day wearing sweatshirts, tights, and a wool hat, and sat in a sauna for hours. Reese says he views Badwater as the epitome of running, a true test of dedication and will.

The race started at 8 p.m. on Monday, July 18. Reese ran throughout the night and all of the following day. Though the heat was definitely an issue, sleep deprivation proved to be his real enemy. “By the second night, I kept falling asleep mid-stride and waking myself up stumbling. I just couldn’t seem to break out of it,” he says. “Even on the last day of the race, during the middle of the day, I was just so tired that I kept falling asleep because I had been up for 40 hours.”

His crew, consisting of his wife and three friends who are all experienced distance runners, kept him going. They took turns driving the support van; making sure food, beverages, and supplements were always on hand, and running with him through dust storms, 120° afternoons, and 3,000-foot climbs.

He reached Whitney Portal at 5:20 p.m. on Wednesday, finishing 77th in the field with a total time of 45:20:33. “I was just so happy and so relieved to see that finish line in front of me. It was really overwhelming,” Reese says. “We’re capable of so much more than we think.” 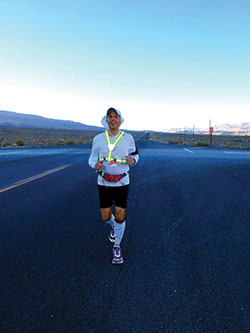 On the course at Badwater.

Over the last seven years, Reese has reached the finish line of numerous “bucket list races,” once-in-a-lifetime experiences that have tested his mental and physical limits. Moving forward, his priorities will be a bit different.

“I want to change my focus to helping others achieve their goals by pacing other runners, maybe doing some coaching,” he says. “I’ll continue to do the races I love, hopefully staying healthy and injury-free. I feel like I’m at a really good place in my running right now where I’ve accomplished what I set out to do, and so now I’m going to focus on having fun.”

Reese’s exploits are chronicled on his blog, and in his new book, Nowhere Near First: Ultramarathon Adventures from the Back of the Pack. With humor and refreshing honesty, he shares anecdotes from races he finished (and those he didn’t), practical knowledge acquired over seven years of running, and advice on going after goals and living life to the fullest.

“There’s never a challenge too big for Cory,” three-time St. George Marathon winner Aaron Metler says. “He’ll run 100 miles and jump up in the air with a smile on his face like he’s out for a walk in the park. It’s always interesting to see what he’s going to do next.”