Trending
Login
You are at:Home»Adventure»Cycling»Where to Bike After Boulder-White Clouds Wilderness 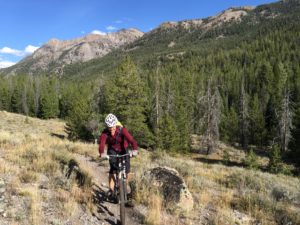 Riding the trails in and around the Sawtooths, White Clouds, and Boulder Mountains between Stanley and Ketchum, at times it feels like I’ve been off my bike more than on it. And I’ve cherished every one of those hard-earned, root-strewn, rough-tread miles.

These trails, a far cry from the manicured built-for-bikes singletrack common in resort towns, that allow for Instagramming along the way, test your mettle as a mountain biker. But, fear not: you won’t have the opportunity to see if you have what it takes. Thanks to the newly formed Boulder-White Clouds Wilderness, the crown jewel bike trails—Antz Basin and Castle Peak Divide—are now off limits to two-wheeled travel.

Catching the mountain bike community by surprise, Idaho Republican Mike Simpson pushed a bill through Congress that had sat stagnant for decades to create the Boulder-White Clouds Wilderness, which was signed by President Obama in August 2015. So, what gives?

Reacting to fear that the White House could have created a larger National Monument using the Antiquities Act, which grants the Executive Branch the power to create National Parks and Monuments, a political poker game began which left mountain bikers on the outside looking in. There were no threats of imminent mining, which would be exempt anyway based on a mining act from the late 1800s, no user conflicts or overuse, and, adding insult to injury—zero studies and limited public input. In an instant, these trails simply vanished. 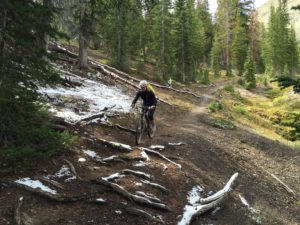 Mountain bikers appreciate wilderness, but are banned from Wilderness—with a capital “W.” The main sticking point for mountain bikers is that our mode of travel had not even been invented when the Wilderness Act was written in 1965, the tool which created the newly formed White Clouds Wilderness.

That legislation describes banned modes of travel to include motorized and mechanized travel. So mountain bikes, which were retroactively considered mechanized, are out. Ironically, mechanical climbing ascenders are allowed (go figure), as well as modern ski touring equipment and spring-assisted trekking poles. What’s a mountain biker to do?

I took a late trip to Stanley, Idaho last summer to ride the classics one last time: much like saying goodbye to an old friend. It was a melancholy sadness, where words can’t describe of a loss which is still physically there—just beyond the reach of my fat tires. 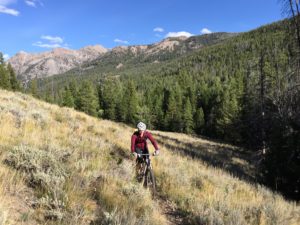 I felt like Edward Abbey must have, watching as Lake Powell slowly erased Glen Canyon. Well, maybe a little more George Washington Hayduke. Lost, just below a few hundred feet of water—or in this case—behind a four-foot tall sign, maddeningly off limits.

Rather than describing our 17-mile, eight-hour epic ride up Chamberlain Divide to Castle Divide, that led to a screaming downhill; let me instead give you, dear reader, some other options.  The former would be tantamount to torture: the rides we’ve lost were that good.

Germania Creek: Start at the Three Forks Trailhead and head down Germania Creek for about two miles, then head up Chamberlain Basin. At about mile five you’ll come to the wilderness boundary. Park your bike and start hiking up to Chamberlain Divide to take in the views of Castle Peak, where the classic ride would have continued on to. Retrace your steps, and if you want more mileage on the return, turn left to out-and-back Germania Creek. While the total elevation gain is moderate, the constant up-and-down spurts will have you hike-a-biking and crossing flows more than most enjoy. Masochists rejoice! Just bring along some waterproof socks.

Fisher/Williams Loop: A classic ride on the western edge of the wilderness, with an easy pedal up a dirt road through a burn area, culminating with a buffed downhill. The best bang for your buck ride in the area, we usually hit this on the way back to SLC as it only take three hours to complete the 17-mile loop. Not indicative of the rest of the Stanley-area rides, but a great one for a group of varied ability and riding goals.

At its heart, Stanley is a river town. It’s the gateway to the classic Middle Fork of the Salmon, where the upper reaches of the Main Salmon River flows through town. Sawtooth Adventure Center (sawtoothadventure.com) runs half-day trips a few miles downstream of town, which includes a great lunch on the river. They can also arrange guided mountain bike or climbing trips.

Both the Sawtooth and BWC Wilderness area are a hiker’s dream. High peaks, alpine meadows, and glacial lakes are par for the course on nearly every hike. Pick any route and you won’t be disappointed. Thanks to the porous Idaho batholith, hot springs dot the map; the perfect end to any adventure.

Camping in the Stanley area can be quite cold in fall. Even in summer we had snow one night and frost every morning, waking to a condensation-soaked 25° tent. Luckily, Downtek—a coated down fiber—keeps the feathers dry and campers warm. $269

Light enough for backpacking trips, yet comfortable enough for car camping, this PrimaLoft insulated pad weighs under 30 ounces and provides another barrier between your bag and the cold ground. $109–199 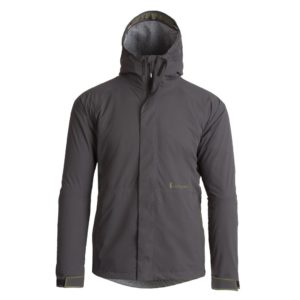 Bringing a lightweight shell along on central Idaho rides is as important as an extra tube or water as the weather changes quickly, especially in the high peaks. $139 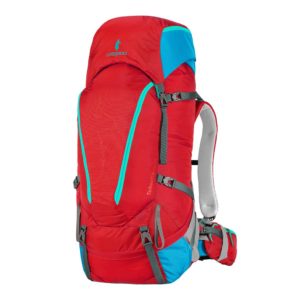 This adjustable suspension pack is intended for overnight backpack trips, but an effective compression system works for day hikes and bike rides where you need to bring extra gear. $189