Trending
Login
You are at:Home»Adventure»Biking & Beer in Boise

Boise, Idaho: Just a five-hour trip from Salt Lake, this city doesn’t seem to be on the radar for many Utahns—but it should be. Boise looks a lot like Salt Lake City did about 20 years ago, boasting a growing downtown, foothills with recreational opportunities, and a feeling that it’s about to come into its own. The expanding brewery scene is similar to Portland’s boom, with several local startups and a few expansions from Oregon opening here.

Two of my wife’s brothers live in Boise, so we went to catch up with family and sample the local suds. Her youngest brother, Jason, attends Boise State University, and therefore knew each and every tap within 20 miles! He agreed to tour guide us (via Uber, of course) to several local spots, and we agreed to introduce him to mountain biking. As a champion athlete in wrestling and football, biking was new to him, and my only chance to compete athletically with him. By the end of the weekend he was—of course—just as fast as I am on two wheels.

Mountain Biking in the Foothills

Speaking of riding, we rode several of the easily accessible foothill trails northeast of downtown. The terrain and views are very similar to the Bonneville Shoreline, but offer way more (MTB Project counts 75) trails to choose from that reach higher on the ridgeline. We started riding at a trailhead called Hulls Creek near the Jim Halls Foothills Learning Center, no more than 10 minutes from downtown. The first mile or two of trail was busy with hikers, joggers, and other bikers, but the crowds easily dispersed onto the plethora of trails in sagebrush-like terrain.

The trail began as wide double-track, getting narrower as the climb continued up Crestline and to Sidewinder, but nothing was above intermediate-level riding, providing fun pedaling for all. The route-finding was quite easy and with so many trails, we were able to ride downhill without running into climbing riders—a huge change from trying to ride down City Creek or Dry Creek— the only easier options than the advanced Bobsled Trail back home.

I found myself wishing SLC would expand the foothill trail system above the Bonneville Shoreline Trail: the options Boise locals have for riding blows away what we have accessible in the foothills. Riders here can opt for quick loops, out-and-backs, or tackle marathon rides to distant ridgelines with views back into downtown Boise. With southern exposure the trails were bone dry in spring, and would likely be hot in the dead of summer. A few higher elevation trailheads offer quicker access to trails heading further north toward taller trees and ample vegetation. We didn’t make it quite this far, but the Gardiner Peak Trail is on my list for next time, as is the Bogus Basin’s (a winter ski resort) summer biking trail system. 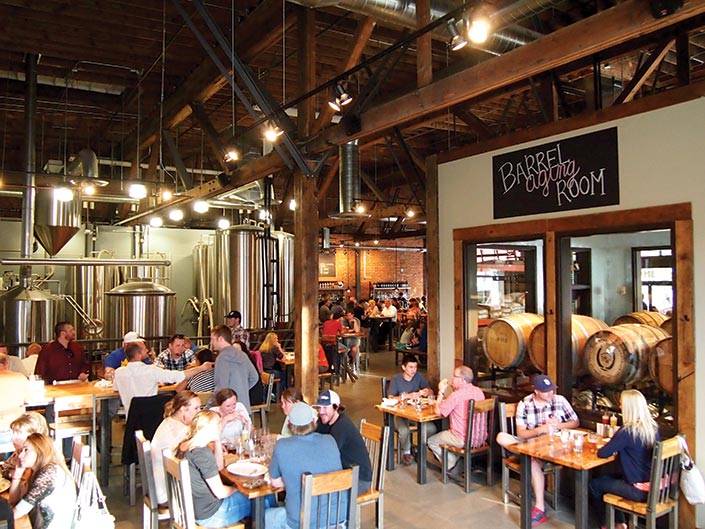 Our first stop on our Boise beer tour, 10 Barrel Brewing, originally opened up shop in Oregon. This expansion location features many of the brews you’re used to seeing from 10 Barrel: Apocalypse and Joe IPAs, Cucumber Crush Sour, plus dozens of others. Several uniques beers are brewed on-site in Boise’s 20-barrel system.

Next up was Sockeye, where the brewhouse feels like a hunting lodge, thanks to its long wooden bar and knotty pine furniture. The beers are rock solid as well, with my favorite being the Dagger Falls IPA. Named for a rapid (or waterfall, depending on your boating skill level) above the put-in for the Middle Fork of the Salmon River a few clicks away outside Stanley, Idaho.

Payette Brewing, also located downtown, offers a dozen or so beers on tap well above Utah’s standard 3.2% ABV. Seasonals and standards provide options after a day of adventuring. The North Fork Lager is a refreshing option after a day in the sun. Payette also has a rotating schedule of food trucks.

The closest suds to the trails we rode were found at Parrilla Grill, in a little section of Boise known as Hyde Park that’s reminiscent of SLC’s 9th and 9th area. While not a brewery, this neighborhood joint had incredible Mexican food and plenty of local beers on tap.

Boise also has something for the wine lovers. After two days of bike, beer, repeat, my wife was ready to mix it up. “Not aaaanother brewery,” was her exact quote I recall. While I was lamenting missing out on local taprooms we had yet to check out—Slanted Rock in nearby Meridian, as well as the namesake Boise Brewing, Edge Brewery, and (you get the idea)—Jason steered us towards a place called Bodovino. Offering easily over one hundred bottles in Wine Emotion machines, Bodovino is a wine lover’s heaven.

This sensory overload experience works like this: load up a plastic card with a set amount of dollars and bring your glass around to these machines, similar to a vending machine where you can choose pours of one, two, or five ounces and have the cost deducted from your card. It’s an amazing way to sample expensive or unique wines without committing to a full glass or bottle. Bodovino also had a wine cellar list totaling over 600 bottles, as well as an ice cold selection of bottled beer, and a cigar library. There is nothing like this place in Utah, or many other places for that matter.

If we’d been able to pry ourselves away from the comfortable patio at Bodovino and our assortment of tapas, we may have tried some tastes from Snake River Winery, just across the street. But, we’ll have to add that to the list for a return trip to Boise—as well as all the breweries I missed.