What to Know Before You Go

The news is abuzz with Bears Ears lately. The Bears Ears National Monument was declared in December 2016, and since then has garnered both applause and criticism. The current boundaries of the monument are massive—they encompass 1.35 million acres of now federal land in Southeast Utah.

The monument got its name from a formation near the center of the land area, where two plateaus stand out above their surroundings, looking like the ears of a bear hiding in the brush. The area is incredibly diverse, with varied opportunities for outdoor adventure. Whether you’re looking for hiking, climbing, backcountry camping and backpacking, or hunting for petroglyphs and ruins, Bears Ears is worth checking out, but the area is rugged, so be sure to keep these tips in mind when planning your trip.

A visitor center volunteer said that, after 65 years of exploring the Bears Ears area, he had nowhere near seen all of it yet. So yeah, it’s really big. But you can be an informed traveler and see a lot of amazing terrain. The Bureau of Land Management’s site has great maps and some brochures on specific sites, and a helpful FAQ page. Your best information may come from speaking with friendly volunteers and rangers at the Monticello field office, the Blanding Visitor’s Center, and the Kane Gulch Ranger Station.

From Salt Lake City, there are four main ways to get there. Taking Highways 6 and 91 south through Price and Moab gives you the most options for gas, food, and lodging along the way, and will take you roughly 6 hours. Blanding could serve as an excellent launching pad for your trip, with a number of small inns and motels, and is perhaps your last chance to stock up on supplies and fuel.

There truly is something for all interests and levels of physicality in Bears Ears. For more casual hikers or families with children, explore the numerous canyons of Butler Wash. There are several short hikes that offer great rewards as you drive north to south along Comb Ridge, like Monarch Cave or Wolfman Panel. Along Highway 95, the Mule Canyon hike houses one of the most well-known sites, the House on Fire ruin. On a hot day, head down to the banks of the San Juan River. A short walk along the river at Sand Island Recreation Area offers a number of petroglyph panels and ruin sites, under a tree canopy and with a cool breeze coming off the water. Sand Island also has developed campsites with restroom facilities.

For backcountry exploring, head to the Grand Gulch Primitive Area, or the Dark Canyon Wilderness. Be sure to visit the ranger station to obtain proper permits and get current terrain condition information.

To the north, along UT-211, there are a number of established campgrounds, and a stunning overlook of The Needles in Canyonlands National Park. Though not technically a part of Bears Ears, Natural Bridges National Monument is an island within Bears Ears, and is certainly worth seeing while in the area.

On the south end of the monument, the Valley of the Gods offers 360-degree views of dramatic rock formations and the ascending cliffs of Cedar Mesa. With a winding road across the valley floor, it’s a great place to take in the sights and camp for the night. There are no designated campgrounds or facilities here, but the valley floor is littered with sites made homey by previous campers. Needless to say, though, you could spend a lifetime exploring the area, so these suggestions are by no means exhaustive. 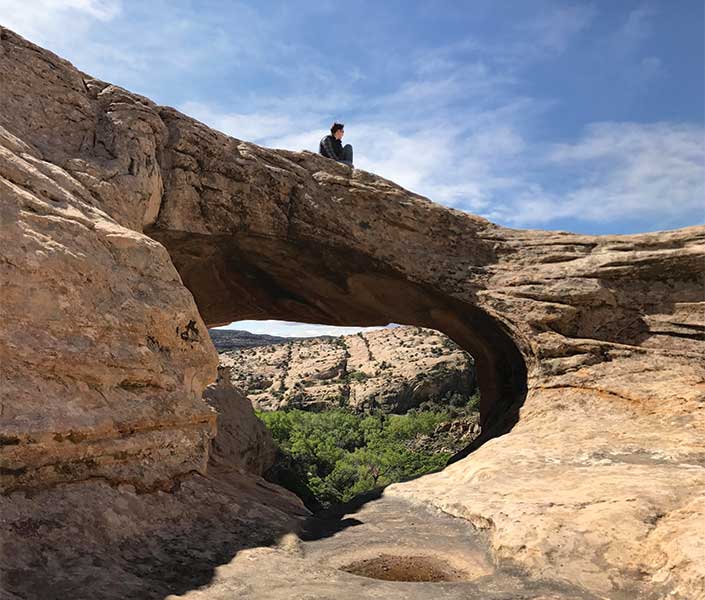 Because this is now federally-protected land, some might assume that it is developed and accessible like many national parks; it is not. Bears Ears still affords a rugged and wild experience. There are places where campgrounds provide picnic tables, fire pits, and restrooms, but much of the area is still open to camping and backpacking without developed resources. You will not find shuttle buses to paved hikes, so know your skill level and come with proper gear.

Be sure to bring plenty of water with you, as southern Utah is a desert, so natural water sources are scarce. Put some thought into the vehicle you take through the monument; there are many roads that are unpaved and may not be accessible by low-clearance vehicles. Once you get past the small towns at the borders of the monument, you could be miles away from another gas station. Pay attention to you gas tank, and fill up well before you are low. But don’t let the untamed nature of the monument dissuade you—there’s plenty to do for all skill levels. Just be smart, and don’t be caught unprepared. 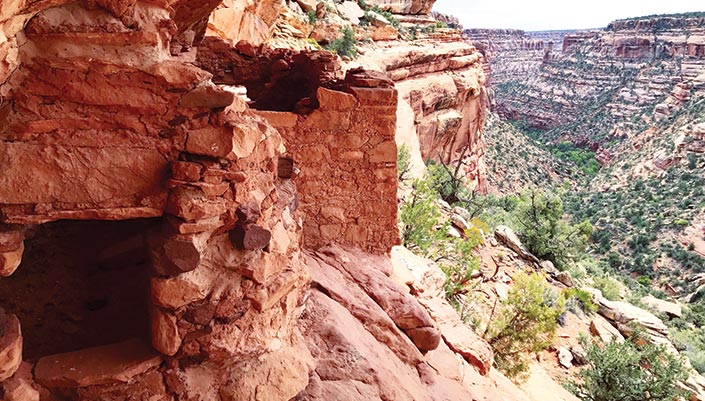 4. RESPECT THE AREA AND ITS HISTORY

Some sources report that there are over 100,000 cultural sites and artifacts within Bears Ears. Many visitors seek out the area after doing research on its native inhabitants and are thrilled to see well-preserved rock art and petroglyph panels, along with dwelling and ceremonial sites.

Unfortunately, however, many of the rock art sites have been defaced by lovers carving out their names in the sandstone, or even small-business owners painting their website near ancient messages. As visitors to the area, we’re incredibly fortunate to get a glimpse of history, and must respect the sacredness and cultural significance of the sites. Though there may not be a fence protecting a centuries-old cave dwelling, you can help preserve it for future study and enjoyment by observing, appreciating, and leaving things untouched and undamaged by human hands.

Some see the national monument declaration as a federal land grab, while others are adamant that any measure necessary must be taken for the area’s protection. Whatever side of the debate you are on, Bears Ears remains an incredible part of Utah’s diverse and unique landscape, ready and waiting for outdoor adventure and exploration.