How These Pups Sniff Out Victims, Save Lives

Being trapped or buried in the backcountry is a skier’s worst nightmare—injured, lost, and alone, willing to give anything to see a friendly face.

Perhaps that face will belong to Ninja, a 5-year-old pointer/lab mix employed as an avalanche search and rescue dog at Deer Valley Resort in Park City. Sue Anderson, who works as the resort’s avalanche mitigation supervisor, brought Ninja home when he was only 49 days old. He spent his first summer riding the chairlifts and socializing with hundreds of visitors.

Deer Valley has two or three avalanche dogs patrolling on any given day during the ski season, and Ninja accompanies Anderson to work each day and rides the lift to his assigned sector. His outgoing personality makes him popular with skiers, especially kids. “He loves to work, but he also loves people,” says Anderson. “But the second I walk into the shack, he’s ready if I need him.”

Though the slopes at Deer Valley are usually quiet, Anderson and Ninja also respond to emergencies in the remote mountain wilderness as members of Wasatch Backcountry Rescue.

WBR is much more than dogs, president Tracy D. Christensen says, but canine search has always been an integral part of their rescue efforts. “Dogs come into play when people don’t have an avalanche beacon,” he says. “They find human scent. They dig and bark to signal when they find the scent and demonstrate victim loyalty; they don’t leave their target.”

German Shepherds, Golden Retrievers, Labradors, English Shepherds, and mixes are among the 41 dogs currently in the WBR program. Some are purchased from breeders, while others are adopted from shelters. “There’s a lot of work and research that goes into the selection of our dogs,” Christensen says. “We’re looking for a high-drive dog that has a lot of desire to be the pack leader out there.”

Puppies begin training at six to eight weeks old. They spend their first year as a C-level dog, learning basic obedience and social skills while becoming familiar with riding on chairlifts, snowmobiles, and helicopters. 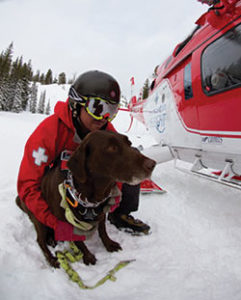 Repetition of these stages and positive reinforcement are key, Anderson says. After mastering the Swiss method, a dog/handler team may obtain their B-level certification, allowing them to participate in rescue operations within the boundaries of the resort for which they work.

With an A-level certification, a team is authorized to respond to any Utah avalanche incident. In the A-level test, teams are given a 100 X 100-yard square search field, beneath which one to three “victims” are buried. Distractions and possible clues—including clothing and other objects—have also been placed in the snow.

The handler must flag these items and work with their dog to clear the entire area within 20 minutes, followed by an oral examination by certified evaluators. In addition to management of their search dog, handlers must be proficient in avalanche rescue skills, shoveling and probing techniques, and wilderness first aid.

WBR dogs also undergo an obedience test every year. A-level teams must re-certify every other year. “It’s not easy,” Christensen says. “Once you get certified, it’s continued training year-round with these dogs.”

At age eight or nine, handlers typically evaluate a dog’s overall health and fitness to determine what the next step in their career should be. Some dogs retire then, but others have stayed on until age 11.

Anderson has been involved with WBR for 15 years, and Ninja is her second avalanche dog and she tries to do a drill or obedience lesson with him every day.

In the summer of 2015, the duo expanded their proficiency to urban and non-winter wilderness searches. They were deployed to southern Utah in September following a deadly flash flood. “His primary focus is being an avalanche dog, but it would be a shame to have such a good work dog that I couldn’t use year-round,” she says.

WBR members meet every month to discuss and practice the latest, most efficient rescue techniques, and the Anderson/Ninja duo has traveled as far as Switzerland for training opportunities.

Dogs are more frequently used to clear an avalanche site and ensure no one was caught beneath the snow than to find a specific victim, says Christensen, which he credits to improved ski safety education in recent years.

The number of deployments WBR dogs receive each season varies greatly depending on weather conditions and snowpack. “If we don’t get called out, that’s a good day for us,” he says.

But when they’re needed, backcountry first responders—on two legs or four—are up for the job.