Trending
Login
You are at:Home»Adventure»How Avalanche Classes Make Sense of a Different Language

“Oooh, those are facets.”

My wife, Laura, had just completed an Avalanche Level I class through Utah Avalanche Center (UAC), and we were on a tour up Grizzly Gulch just east of Alta to test her new skills. “I think we’re on a 30-degree slope,” she says.

I pull out my inclinometer. “31 degrees. Damn close. You learned all of that in four days?”

“Yeah, Jake (her instructor) taught us. Oh! Look at how flagged these pine trees are. This definitely slid before!”
It took me five or more years—at least—of reading books, asking questions, scouring websites, and teaming up with veteran backcountry skiers to learn what she had just in the past weekend.

For those new to avalanche lingo, facets are angular snow that does not bond very well to other layers in a snowpack, usually due to large temperature differences within the snowpack. Most avalanches are caused by this weak layer.

Flagged trees refer to trees with bottom branches all torn off the uphill sides of the trunk: proof of past snow slides. And an inclinometer measures the steepness of a slope, which is an important metric as most avalanches occur between certain angles.

For most of my ski life, I was a statistic. Expert skier. Male. Twenty-something years old. Zero formal avalanche education. I’m lucky I got out alive. It started with short swings into the backcountry. Take the lift up, exit a gate, ski down some fresh powder (hey, everyone else was doing it—look at all the tracks) and skate back into the resort. 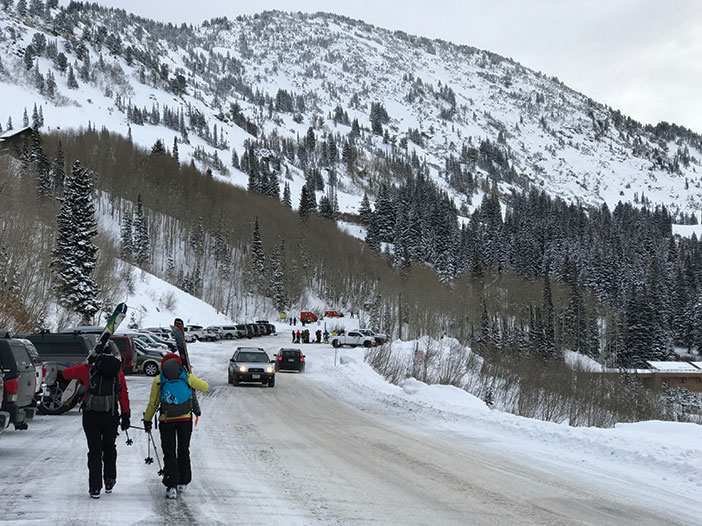 The fact is, the terrain just outside a resort’s gate may as well be a dozen miles away from an avalanche perspective, as it’s not controlled by ski patrol. But it feels safe because of its proximity to controlled terrain. Then came touring equipment. And then hut trips.

Sooner or later I was one of the more seasoned folks in the group, and woefully unprepared to make decisions for others, especially when the stakes were each other’s lives. Trial and error might work just fine for many tasks, but avalanche awareness is not one of them.

When Laura wanted to get into backcountry skiing I was more than happy to help find gear, trim skins, adjust poles. But become her mentor? Not a chance. A relationship test few pass is teaching your significant other to ski or ride, which requires encouragement above anything else. But avalanche skills? No, leave that to the actual professionals. So one cold December weekend Laura and her friend Sarah, fixed their skins, clicked in, and joined their class of a dozen or so for their two “field days” in Little Cottonwood.

Beginning with two evening classroom sessions their instructor Jake explained the basics: slope angles likely to produce avalanches, weather, how to read the layers in the snowpack, signs of previous avalanches. Now they were out to apply the knowledge they had learned in Grizzly Gulch – an area every backcountry skier and splitboarder has toured at least once (probably dozens) of times in their lives.

Back to our tour up Grizzly the following week, Laura was speaking a language that would have been all but foreign a week ago. Facets. Flagging. Slope Angles. I thought I could trick her. “What about skiing the right side of this slope and reconvening by that cluster of trees?”

“That looks like a terrain trap,” Laura confidently replies.

I had pointed to a snake pit of sorts. Definitely an area to avoid.

“Why don’t we just ski this low angle stuff, and that will take us right back to the skin track?” she offers.

Yup. That is exactly the right choice to make. And there is no way I would have ever known that my first year—or years—of touring. Kudos the the pros and the Utah Avalanche Center—they really deliver on their promise of “Keeping you above the snow.” 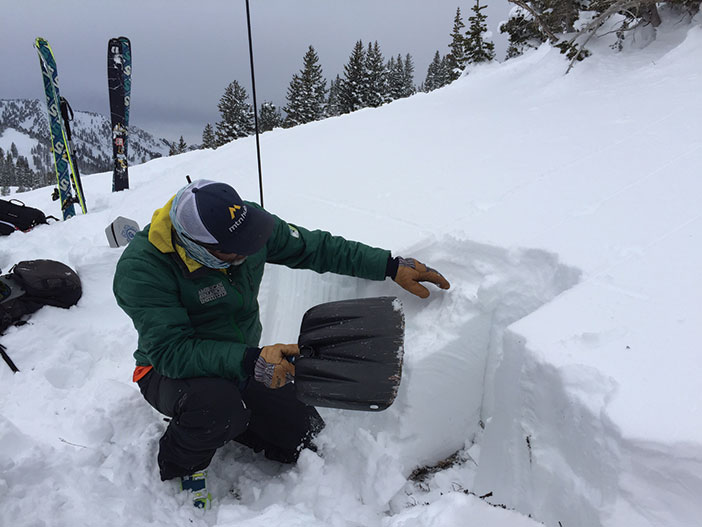 Checking avalanche conditions in the snowpack

Certification can be broken down in Level I, II, and III. Level I is aimed at beginners, while Level III is geared towards aspiring guides and professionals.

Options abound for classes: UAC offers them, as well as Snowbird Backcountry Guides, who are AIARE certified, and White Pine Touring in Park City.

Several classes are offered each month. There’s no excuse not to take one, whether for the first time or as a refresher.