Trending
Login
You are at:Home»Venues»Shops at Riverwoods – Provo

Hero Half and 5K

The Shops at the Riverwoods, Provo, UT. First-ever Hero Half race. There is no better way to get yourself back in shape than by running this nice and easy 5K.  Later in the year in honor of our veterans, we will be hosting the Hero Half and Hero 5K!  The goal of these races is to raise support for the heroes of our community.  Proceeds will be used to help the families of veterans and first-responders families. 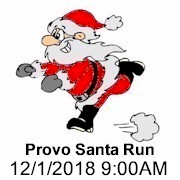 The Utah Santa Run is the Jolliest 5K in Utah requiring all runners to run dressed as Santa Claus. These races are in Ogden, Provo and West Jordan at Gardner Village. All races include a full Santa Claus costume (Hat, Beard, Jacket, Pants, and Belt) to keep after the race. These races are so funny and fun to run. These races start with a Santa Warm Up exercise, then you run on one of the three awesome themed courses. These races have milk and cookie aid stations as well as volunteers that dress as elves to support the course. Christmas music plays overhead and they each are followed by fun holiday city Christmas Magic. Kids 8 and under run for free with paid adult!